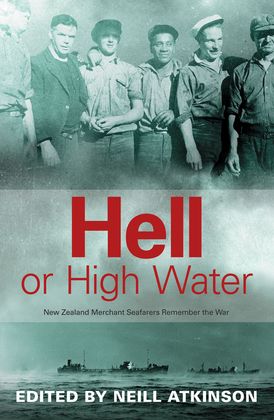 During World War Two several thousand New Zealanders served in the Merchant Navy. Many braved the deadly German U-boats during the Battle of the Atlantic and sailed in perilous convoys to Arctic Russia and Malta.
Following the successful publication of the larger format Oral History Series, these titles are being re-released in trade at a lower price point, in order to meet the increasing interest in military history. During WW2 thousands of New Zealanders served in New Zealand, British and other Allied merchant marines. Many braved the deadly German U-Boat threat during the Battle of the Atlantic - the longest campaign of the war - and sailed in perilous convoys to Arctic Russia, Malta and other high risk routes. Others manned transport and hospital ships and took part in the Allied landings in North Africa, Italy and Normandy, with 105 100 Kiwi merchant seafarers killed, 28 taken prisoner, five of whom died in Japanese captivity, but these figures are artificially low, with many others listed as general British losses. While these figures are small compared to other services, no other civilian group faced such constant risk and the vital contribution of this 'fourth' service has never received the recognition it deserves. the book includes firsthand accounts from men who survived air and submarine attacks, sometimes enduring days adrift in open lifeboats, a seaman awarded the George Cross during the 1942 pedestal convoy to relieve Malta and another who spent three years in Changi prison, amongst many other stirring and poignant accounts of life at war.

Neill Atkinson is a historian working with the oral history unit of the Ministry for Culture and heritage. He lives and works in Wellington.

Other Works by Neill Atkinson