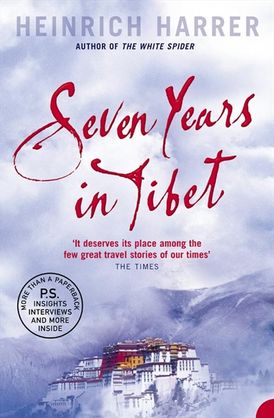 A landmark in travel writing, this is the incredible true story of Heinrich Harrer’s escape across the Himalayas to Tibet, set against the backdrop of the Second World War.

Heinrich Harrer, already one of the greatest mountaineers of his time, was climbing in the Himalayas when war broke out in Europe. He was imprisoned by the British in India but succeeded in escaping and fled to Tibet. Settling in Lhasa, the Forbidden City, where he became a friend and tutor to the Dalai Lama, Heinrich Harrer spent seven years gaining a more profound understanding of Tibet and the Tibetans than any Westerner before him.

More recently made into a film starring Brad Pitt, Seven Years in Tibet is a stunning story of incredible courage and self-reliance by one of the twentieth century’s best travel writers.

Heinrich Harrer was born in 1912 in Carinthia. His skiing prowess won him a place in the 1936 Austrian Olympic team. He was imprisoned by the British in India during the Second World War, but escaped and travelled to Tibet, a story he recounts in the classic Seven Years in Tibet. He died in 2006.

Other Works by Heinrich Harrer