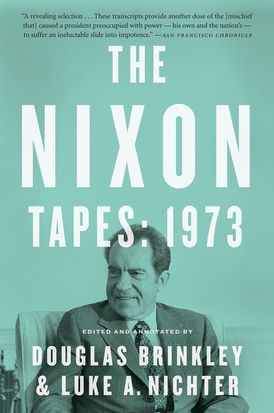 Between 1971 and 1973, President Richard Nixon’s voice-activated tape recorders captured 3,700 hours of conversations. Douglas Brinkley and Luke Nichter’s intrepid two-volume transcription and annotation of the highlights of this essential archive provides an unprecedented and fascinating window into the inner workings of a momentous presidency.
The Nixon Tapes: 1973 tells the concluding chapter of the story, the final year of taping, covering such events as the Vietnam cease-fire, the Wounded Knee standoff, and, of course, the Watergate investigation. Once again, there are revelations on every page. With Nixon’s landslide 1972 reelection victory receding into the background and the scandal that would scuttle the administration looming, The Nixon Tapes: 1973 reveals the inside story of the tragedy that followed the triumph.

“A revealing selection . . . For those of us who would never tolerate the crackle and confusion of earphone eavesdropping, these transcripts provide another dose of the ugly (also sometimes comic) shenanigans by which the Nixon team violated the Constitution and caused a president preoccupied with power – his own and the nation’s – to suffer an ineluctable slide into impotence.”  —The New York Times Book Review    “[Brinkley & Nichter] have done a great service.”  —Austin American-Statesman   “Endlessly fascinating . . . Essential for students of late-20th-century American history and the Nixon presidency.”  —Kirkus, starred review     —

LUKE NICHTER is an associate professor of history at Texas A&M University–Central Texas. He is a noted expert on the Nixon tapes as a result of his efforts to digitize the nearly 4,000 hours of recordings he makes available online as a public service, and he is the author of an ongoing petition before the District Court for the District of Columbia to open Watergate-related government records still sealed in the National Archives. Nichter's work has been reported on by the New York Times, the Washington Post, and the Associated Press.

Other Works by Luke Nichter