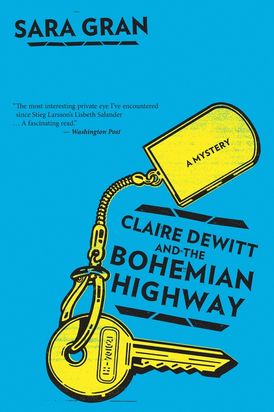 From the author of City of the Dead, comes a spellbinding mystery with "the most interesting private eye...since Stieg Larsson’s Lisbeth Salander" (Washington Post).

When Claire DeWitt’s ex-boyfriend Paul Casablancas, a musician, is found dead in his Mission District house, Claire is on the case. Paul's wife and the police are sure Paul was killed for his valuable collection of vintage guitars. But Claire, the best detective in the world, has other ideas. Even as her other cases offer hints to Paul’s fate—a missing girl in the grim East Village of the 1980s and an epidemic of missing miniature horses in Marin County-–Claire knows: the truth is never where you expect it, and love is the greatest mystery of all.

"In her second outing, tattooed cokehead Claire DeWitt puzzles over the murder of an ex-boyfriend. There's absolutely nothing predictable about either the multilayered investigation—cloaked in references to Indian scriptures, Thomas Merton, and cheesy 1980s TV mysteries—or DeWitt herself, who charms despite her fraying life. A" —Entertainment Weekly   "This is a heroine who is so flawed - and so achingly desperate to be otherwise -- that you can't help but relate. . . .Claire's quest to avenge Paul is compelling, but her insistence on uncovering the mystery of her own self-destruction is what makes this book not just a compelling mystery, but a novel." -- Oprah.com   "The high-stepping, coke-snorting, Zen-loving heroine of Sara Gran's new novel is something of a mess, but she's also the most interesting private eye I've encountered since Stieg Larsson's Lisbeth Salander. . . .She mostly follows her intuition, along with the precepts laid down by the great (and fictional) French detective Jacques Silette, who said things like, 'Solutions wait for you, trembling, pulling you to them, calling your name, even if you cannot hear.'" —Washington Post   '"If Haruki Murakami wrote The Wire, it would come out something like Sara Gran; cryptic, dreamy, funny and gritty as hell. She's a phenomenal talent. Claire DeWitt is an unreliable detective unlike any other." -- Lauren Beukes, author of The Shining Girls   "When I began reading a new mystery by Gran and realized I had entered a fresh, fully realized noir world, I felt a rush of private-eye, patriotic pride. . . . I highly recommend her introspective and yes, poetic mystery adventure." -- Maureen Corrigan, NPR   "From Nancy Drew to Miss Marple to Lisbeth Salander, there's a long and distinguished line of famous women in mystery fiction. I have a new favorite female sleuth to add to the list, Claire DeWitt." —CNN.com   "The Claire DeWitt novels are not so much noir mysteries as stories about the nature of mysteries themselves. The stories are wise, chilling, insightful and reeking with despair—and yet so beautifully written in an original, quirky style that it is difficult to resist them. . . . Readers will marvel at Gran’s talent." —Bruce DeSilva, Associated Press "Most novels, regardless of genre, appeal to readers' minds or to their emotions. The dark mysticism of Gran's books, however, echoes within their souls." -- Examiner.com "Claire DeWitt recognizes a clue by the weird chills she gets when she first encounters it, and she makes some of her most important deductions in dreams . . . She's a fortysomething, chemically adventurous, bed-hopping, gun-toting, hard-boiled, socially dysfunctional, existentially New Age Nancy Drew. . . It's well worth following her wherever she decides to look." -- Laura Miller, Salon "Gran continues to reinvent the crime novel with her latest, Claire DeWitt and the Bohemian Highway, in which her inimitable protagonist follows a tangled web of cases involving the murder of Claire's musician ex-boyfriend, the mysterious theft of a group of miniature horses, and a trip down the rabbit hole of her own psyche." -- Publishers Weekly —

Sara Gran is the author of five critically acclaimed novels, including Come Closer, Dope, and the Claire DeWitt series. She also writes for film and TV and has published in the New York Times, the New Orleans Times-Picayune, and USA Today.

Other Works by Sara Gran