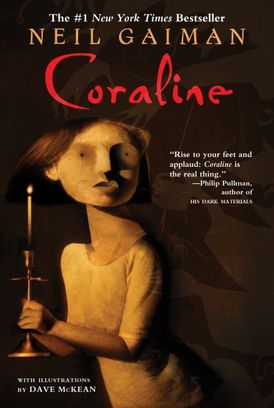 This edition of New York Times bestselling and Newbery Medal-winning author Neil Gaiman’s modern classic, Coraline—also an Academy Award-nominated film—is enriched with a foreword from the author, a reader's guide, and more.

"Coraline discovered the door a little while after they moved into the house...."

Neil Gaiman's Coraline is a can't-miss classic that enthralls readers age 8 to 12 but also adults who enjoy a perfect smart spooky read.

“Gaiman’s tale is inventive, scary, thrilling and finally affirmative. Readers young and old will find something to startle them.” — Washington Post Book World

“Gaiman’s pacing is superb, and he steers the tension of the tale with a deft and practiced narrative touch.” — Bulletin of the Center for Children’s Books

“Ladies and gentlemen, boys and girls, rise to your feet and applaud: Coraline is the real thing.” — Philip Pullman, The Guardian

“The most splendidly original, weird, and frightening book I have read, and yet full of things children will love.” — Diana Wynne Jones

“It has the delicate horror of the finest fairy tales, and it is a masterpiece.” — Terry Pratchett

“ Walk through the door and you’ll believe in love, magic, and the power of good over evil.” — USA Today

“So wonderfully whimsical that readers of all ages will hungrily devour itCoraline is destined to become a classic. — Globe and Mail (Toronto)

“Chilly, finely-wrought prose, a truly weird setting and a fable that taps into our most uncomfortable fears.” — Times Educational Supplement

“A deliciously scary book that we loved reading together as a family.” — Orson Scott Card

“A frighteningly realistic fantasy. Lean crisp prose adds to the suspense and propels the story, and the eerie black-and-white illustrations by Dave McKean heighten the nightmarish quality of the tale.” — Voice of Youth Advocates (VOYA)

“Kids will hang on every word. Coraline is a character with whom they will surely identify, and they will love being frightened out of their shoes. This is just right for all those requests for a scary book.” — School Library Journal (starred review)