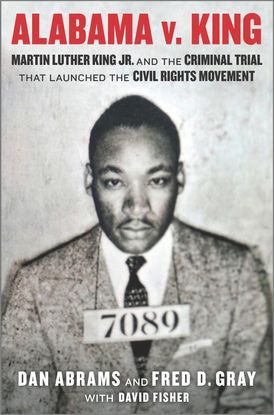 The defense lawyer for Martin Luther King, Jr., Rosa Parks, the Selma marchers, and other civil rights heroes reveals the true story of the historic trial that made Dr. King a national hero.

Fred D. Gray was just twenty-four years old when he became the defense lawyer for Dr. Martin Luther King, Jr., a young minister who had become the face of the bus boycott that had rocked the city of in Montgomery, Alabama. In this incredible history, Gray takes us behind the scenes of that landmark case, including such unforgettable moments as:

*Martin Luther King's courageous response to a bomb threat on his own home
*Poignant, searing testimony that exposed the South's racist systems to an worldwide audience
*The conspiracy to destroy Gray's career and draft him into the Vietnam War
*The unforgettable moment when a Supreme Court ruling brought the courtroom to a halt

Alabama v. King captures a pivotal moment in the fight for equality, from the eyes of the lawyer who Dr. King called "the brilliant young leader who later became the chief counsel for the protest movement."

“Abrams and Fisher are gifted writers, and their prose is neither overly spare nor showy; they're clearly fascinated by the trial, and their enthusiasm for their subject matter shows.” —NPR on Theodore Roosevelt for the Defense

“The authors do a remarkable job of spinning the court transcripts into a fascinating tale of intrigue and underscoring the men and the issues at play.” —Fredericksburg Book Review on John Adams Under Fire

“An engrossing, lively and expertly crafted courtroom drama filled with colorful characters and having significant resonance for the present.” —Washington Post on Kennedy’s Avenger -

Fred D. Gray, one of the nation’s leading civil rights attorneys, was the lawyer for Rosa Parks, Martin Luther King Jr., Ralph Abernathy and the Montgomery Bus Boycott, which began the modern Civil Rights Movement. His other cases and clients include the Freedom Riders, the Selma to Montgomery March, John Lewis, numerous school desegregation and voting rights lawsuits, and many others. He lives in Tuskegee, Alabama.

Other Works by Fred D. Gray