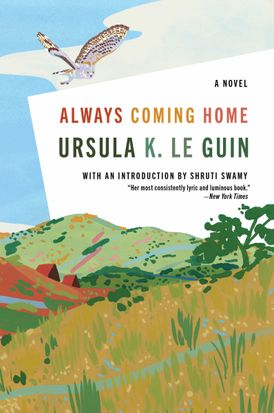 “One of [Le Guin's] most radical novels. . . . Always Coming Home is a study in what a complete and utter rejection of capitalism and patriarchy might look like—for society and for the art of storytelling."—The Millions

Reissued for a new generation of readers, Ursula K. Le Guin’s magnificent work of imagination, a visionary, genre-crossing story about a future utopian community on the Northern California coast, hailed as “masterly” (Newsweek), “hypnotic” (People) and “[her] most consistently lyric and luminous book” (New York Times).

Midway through her career, Ursula K. Le Guin embarked on one of her most detailed, impressive literary projects, a novel that took more than five years to complete. Blending story and fable, poetry, artwork, and song, Always Coming Home is this legendary writer’s fictional ethnography of the Kesh, a people of the far future living in a post-apocalyptic Napa Valley.

Having survived ecological catastrophe brought on by relentless industrialization, the Kesh are a peaceful people who reject governance and the constriction of genders, limit population growth to prevent overcrowding and preserve resources, and maintain a healthy community in which everyone works to contribute to its well-being. This richly imagined story unfolds through a series of narrated “translations” that illuminate individual lives, including a woman named Stone Telling, who travels beyond the Valley and comes to reside with another tribe, the patriarchal Condor people. With sharp poignancy, Le Guin explores the complexities of the Kesh’s unified society and presents to us—in exquisite detail—their lives, histories, adventures, customs, language, and art.

In addition to poems and folk tales, Le Guin created verse dramas, records of oral performances, recipes, and even an alphabet and glossary of the Kesh language. The novel is illustrated throughout with drawings by artist Margaret Chodos and includes a musical component—original recordings of Kesh songs that Le Guin collaborated on with composer Todd Barton—bringing this utterly original and compelling world to life.

"A gift to the reader, a gentle and wise book that is her most personal, her most daring, probably her best yet." — St. Louis Post Dispatch

"Some stories are timeless, and can be located anywhere on earth, without the content being altered. Ursula Le Guin's enthralling new book is one of those." — Minneapolis Star and Tribune

"One of Le Guin’s most fascinating and underrated works: a sprawling exploration of a fictional people known as the Kesh, who lived in northern California hundreds of years in the future. . . . A novel, a scrapbook and an imaginary anthropological study in one . . . crammed with maps, stories, songs, recipes, poetry, charts and language guides." — The Guardian

"With high invention and deep intelligence, Always Coming Home presents, in alternating narratives, poems and expositions, Ursula K. Le Guin's most consistently lyric and luminous book in a career adorned with some of the most precise and passionate prose in the service of a major imaginative vision." — New York Times

"The effect it has on the reader is hypnotic. . . . Le Guin has chosen a most original way to reveal this imagined land." — People

"An appealing book as well as a masterly one. . . . The future world she has created here is awesomely complex." — Newsweek

"This may be her masterpiece, a collage of documents and artifacts tracing the history of a future agrarian society that has grown out of the ruins of the industrialized past."
— Alta: Journal of Alta California

"One of [Le Guin's] most radical novels. . . . Always Coming Home is a study in what a complete and utter rejection of capitalism and patriarchy might look like—for society and for the art of storytelling." — The Millions

"Always Coming Home is an act of discovery. . . . Everything Le Guin does is interesting, believable, and exquisitely detailed." — Los Angeles Herald Examiner

"Envisioning a possible future (and attacking present folly), Le Guin reinvents a "primitive" past. . . . Dancing their oneness with nature, valuing cooperation over competition, the Kesh survive contact with the hieratic, war-making, death-dealing Condors, who are a lot like us. If it's hard to believe in a people who use computers and electricity but plow with oxen and see wealth as giving, that's part of the point." — Library Journal

URSULA K. LE GUIN was born in Berkeley, California, in 1929, and passed away in Portland, Oregon, in 2018. She published over sixty books of fiction, nonfiction, poetry, drama, children’s literature, and translation. She was the recipient of a National Book Award, six Hugo and five Nebula awards, and was inducted into the American Academy of Arts and Letters.

Words Are My Matter

No Time To Spare

Direction of the Road

A Trip to the Head

Vaster than Empires and More Slow