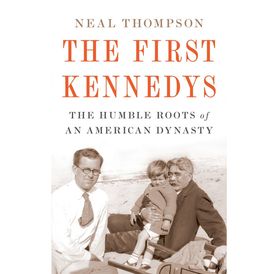 “Here is that rare thing: an untold chapter in the Kennedy saga. . .Compelling and illuminating.”—Jon Meacham

Based on genealogical breakthroughs and previously unreleased records, this is the first book to explore the inspiring story of the poor Irish refugee couple who escaped famine; created a life together in a city hostile to Irish, immigrants, and Catholics; and launched the Kennedy dynasty in America.

Their Irish ancestry was a hallmark of the Kennedys’ initial political profile, as JFK leveraged his working-class roots to connect with blue-collar voters. Today, we remember this iconic American family as the vanguard of wealth, power, and style rather than as the descendants of poor immigrants. Here at last, we meet the first American Kennedys, Patrick and Bridget, who arrived as many thousands of others did following the Great Famine—penniless and hungry. Less than a decade after their marriage in Boston, Patrick’s sudden death left Bridget to raise their children single-handedly. Her rise from housemaid to shop owner in the face of rampant poverty and discrimination kept her family intact, allowing her only son P.J. to become a successful saloon owner and businessman. P.J. went on to become the first American Kennedy elected to public office—the first of many.

Written by the grandson of an Irish immigrant couple and based on first-ever access to P.J. Kennedy’s private papers, The First Kennedys is a story of sacrifice and survival, resistance and reinvention: an American story.

NEAL THOMPSON is a journalist and the author of five highly acclaimed books, including A Curious Man, Driving with the Devil, and the fatherhood-and-skateboarding memoir Kickflip Boys. He has written for the New York Times, the Washington Post, Esquire, Outside, Oprah.com, and more and has taught creative nonfiction at Hugo House and the Great Smokies Writing Program. He lives in Seattle with his family.

Other Works by Neal Thompson

The Company I Keep