All Day Is A Long Time 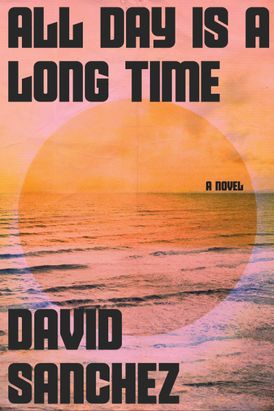 All Day Is A Long Time

"Urgent, sharp and expansive...this exceptional debut is not a cautionary tale about the perils of drugs, but it certainly is the story of so many people right now, and it somehow leaves us with hope. What’s more, the rare if dark gems found along its ocean floors, all sharp and brittle and made of base desire, let us glean a part of what’s at the heart of addiction itself." —Tommy Orange, The New York Times

For fans of Denis Johnson and Ocean Vuong: A captivating, searing, and ultimately redemptive debut novel about coming of age on Florida’s drug-riddled Gulf Coast and the enigmatic connection between memory and self

David has a mind that never stops running. He reads Dante and Moby Dick, he sinks into Hemingway and battles with Milton. But on Florida’s Gulf Coast, one can slip into deep water unconsciously; at the age of fourteen, David runs away from home to pursue a girl and, on his journey, tries crack cocaine for the first time. He’s hooked instantly. Over the course of the next decade, he fights his way out of jail and rehab, trying to make sense of the world around him—a sunken world where faith in anything is a privilege. He makes his way to a tenuous sobriety, but it isn't until he takes a literature class at a community college that something within him ignites.

All Day is a Long Time is a spectacular, raw account of growing up and managing, against every expectation, to carve out a place for hope. We see what it means, and what it takes, to come back from a place of little control—to map ourselves on the world around, and beyond, us. David Sanchez’s debut resounds with real force and demonstrates the redemptive power of the written word.

"Urgent, sharp and expansive...this exceptional debut is not a cautionary tale about the perils of drugs, but it certainly is the story of so many people right now, and it somehow leaves us with hope. What’s more, the rare if dark gems found along its ocean floors, all sharp and brittle and made of base desire, let us glean a part of what’s at the heart of addiction itself." — Tommy Orange, The New York Times

"David Sanchez has poured all of himself into this debut, a terrifying, moving, and profound exploration of the liminal space between addiction and connection. Sanchez evokes the minute-to-minute suspense of early sobriety unlike anyone I've ever read, with an extraordinary honesty and poetry. Sanchez is a literary cartographer, mapping an intricate overlay of his young narrator's psychological states and Florida's real beaches and swamps, those coastlines in continuous revision." — Karen Russell, author of Swamplandia! and Vampires in the Lemon Grove

"David Sanchez's first novel—brilliant, lyrical, hilarious, heartbreaking—is the definitive handbook to hell and back. I haven't read anything as toughly vulnerable since Denis Johnson's Jesus' Son. A stunning debut." — Cristina García, author of Dreaming in Cuban

"This book has it all, not only does the harrowing story grip you from the start, but the voice is so insightful, so poetic, so absolutely alive to the world, that you won't be able to put it down. David Sanchez is a wonder, an important, essential new voice." — Justin Torres, author of We the Animals

"An addiction novel that redeems the genre...Sanchez’s autofiction has its own distinctive feel." — Los Angeles Times

"In his rich, visceral debut novel, All Day Is a Long Time, David Sanchez sketches a portrait of addiction and young adulthood that wrestles with the limitations of recovery narratives." — Shelf Awareness

"All Day is a Long Time is the most terrifying and beautiful exploration of how addiction is made. David Sanchez has written a gulf coast classic." — Kiese Laymon, author of Long Division and Heavy

"This journey into the mind of a young addict is like nothing I’ve ever read—a terrifying, and often ecstatic, struggle for survival. It’s an obsessive world of chemical equations and philosophical conundrums, an attempt to reckon with a breathless descent into madness. Sanchez’ hero looks the devil in the eye and returns to tell a death-defying tale of redemption." — Chris Rush, author The Light Years

"David Sanchez has written the rarest kind of novel. His subject matter, spanning so many aspects of contemporary American pain, is incredibly important, but it is his beautifully constructed sentences which make the narrative sing." — Garrard Conley, author of Boy Erased

"Striking…unstoppable, writing with an undeniable power...the narrator is a memorable creation, vulnerable and self-aware. A captivating debut." — Kirkus Reviews

"Wonderfully evocative of the seedy underbelly of Florida’s Gulf Coast, Sanchez's tale follows David as he cycles through recovery, relapses, homelessness, and rehab, yielding a stunningly written depiction of rock bottom. The prose flows like the water that surrounds the coast, occasionally crashing over the reader with arresting descriptions of drug-induced paranoia…Even when describing horrors, Sanchez’s rich, stylish prose is a treat to read. This is a brilliant, harrowing, and unflinching depiction of a journey to the brink and back." — Alexander Moran, Booklist

"Sanchez’s shimmering debut uses rapid-fire prose and dark humor to sketch the hardscrabble coming-of-age of a boy on the Florida Gulf Coast…Sanchez is a daring, clever writer…This gritty and engrossing account of a man traversing into and out of hopelessness will stay with readers." — Publishers Weekly

"Invigorated by the bite of authenticity...what makes this debut stand out are its fascinating philosophical qualities. The depths that Mr. Sanchez depicts may be specific to the experiences of the most down-and-out addicts; the moving journey back into the world has universal application." — Wall Street Journal

"Writing like this is a passport to a different country: different rules, different business hours, different food and horizons. It’s dark but awfully appealing. We run toward it, then slow for the crash, wondering who will die and how. Another reason books like this continue to work is the clear agony of the “messenger,” a mix of compulsion and duty to share the journey, the depravity, the possibility of redemption… What’s so clarifying about All Day Is a Long Time is how it asks us to think about what any of us really needs in the end." — Los Angeles Times

"Sanchez’s debut novel All Day is a Long Time is...about addiction, about the search for footing in a world which offers no gravity...What does good art provide or what does it feel like it’s providing, if not exactly this, this sure footed gravity?" — Chicago Review of Books

"This is raw, semi-autobiographical fiction at its most painfully honest…Sanchez’s writing has a fine, almost hallucinatory quality, it’s also a thought-provoking portrait of the vulnerability present in family life and how easily that can turn into damage." — The Guardian

DAVID SANCHEZ is the recipient of a James A. Michener Creative Writing Fellowship at the University of Miami, a PEN America Writing for Justice Fellowship, and a Tin House Scholarship in 2018. He lives in Tampa, Florida. All Day Is a Long Time is his first novel.

Other Works by David Sanchez