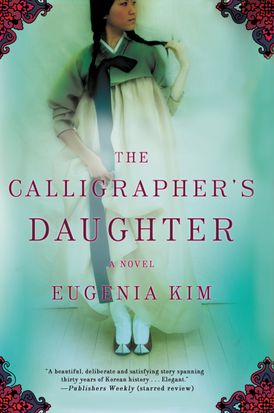 In early-twentieth-century Korea, Najin Han, the privileged daughter of a calligrapher, longs to choose her own destiny. But her country is in tumult under Japan's harsh occupation, and her family's traditions, entitlements, and wealth crumble. Narrowly escaping an arranged marriage, Najin becomes a companion to a young princess, until Korea's last king is assassinated, and the centuries-old dynastic culture comes to its end.

Najin pursues a coveted education and is surprised to find love. After one day of marriage, a denied passport separates her from her new husband, who journeys alone to America. As a decade passes and the world descends into war, Najin loses touch with her husband. Will the love they share be enough to sustain her through the deprivation her country continues to endure? The Calligrapher's Daughter is a "vivid, heartfelt portrait of faith, love and life for one family during a pivotal time in history" (Bookpage).

“Eugenia Kim’s sensitive first novel, which depicts thirty years of Korea’s modern history in light of its ancient past, is an illuminating prequel to present-day events…Kim recounts a poignant family history, much of it based on her own mother’s life…The narrative is keenly and often lyrically observed…A satisfying excursion into empathetically rendered lives.”—Sybil Steinberg, Washington Post     “The Calligrapher’s Daughter fascinated me, as much for its characters as for its engrossing story of Korea under the Japanese occupation. Najin’s father is admirable for exactly the traits that make him difficult, and her apparently passive mother is heroic. I can’t stop thinking about them and their honest, brave, and very human daughter.” —Alice Mattison, author of Nothing is Quite Forgotten in Brooklyn and The Book Borrower     “A beautiful, deliberate and satisfying story spanning thirty years of Korean history…Elegant.”—Publishers Weekly, starred review   “Gripping…Eugenia Kim’s debut novel feels particularly fresh…Kim creates a strong, sweet bond between mother and daughter that is maintained throughout the novel.”—Anne Morris, Dallas Morning News    “Eugenia Kim’s sweeping debut, The Calligrapher’s Daughter, rises tall from a riveting scene that begs to be read and re-read—as does her entire novel about the painful change that Japanese occupation and modern ways bring to traditional, ritualistic Korea…Kim’s prose is elegant, her eye compassionate, and her ability to effortlessly compress events over thirty years into a moving novel is admirable. But her greatest triumphs are her carefully calibrated and brave characters, who haunt you long after the novel is done.” —Geeta Sharma Jensen, Milwaukee Journal Sentinel   “Fans of Lisa See’s or Amy Tan’s novels should eagerly embrace Najin, and The Calligrapher’s Daughter bids fair to become a staple of book clubs.”—Yvonne Zipp, Christian Science Monitor   “Kim has excelled at portraying Najin as a spirited yet loyal daughter and wife while exposing a tragic time during Korea’s sustained history as a nation.”—Library Journal   “Kim opens a window into a vanished world in this sensitively rendered homage to her mother’s life…Fans of Lisa See’s…Shanghai Girls will be drawn into this achingly beautiful tribute to female perseverance and survival.”—Booklist   “A bold, richly detailed story about the young daughter of a well-known calligrapher in turn-of-the 20th-century Korea…[A] vivid, heartfelt portrait of faith, love and life for one family during a pivotal time in history.”—Amy Scribner, Bookpage    “In The Calligrapher's Daughter Eugenia Kim beautifully chronicles both the lost world of a traditional Korea and the lost childhood of her remarkable heroine.  A coming-of-age story that resonates with larger significance, the novel movingly depicts the emotional cost of transformation and the love and sacrifice that make transformation possible.  The Calligrapher's Daughter is at once the story of a single life as well as the changing life of a nation and, while the details are fascinatingly exotic, the narrative rings with the hard-won truths of profound human experience.  It is a note-worthy debut from a writer with great heart and real empathy.”—Sheridan Hay, author of The Secret of Lost Thing& —

Other Works by Eugenia Kim