A New History of the Great Depression 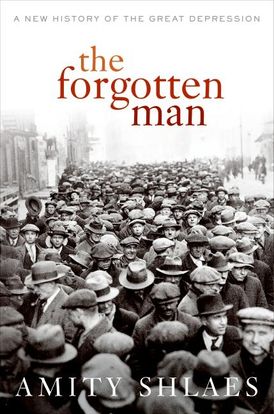 A New History of the Great Depression

It's difficult today to imagine how America survived the Great Depression. Only through the stories of the common people who struggled during that era can we really understand how the nation endured. These are the people at the heart of Amity Shlaes's insightful and inspiring history of one of the most crucial events of the twentieth century.

In The Forgotten Man, Amity Shlaes, one of the nation's most respected economic commentators, offers a striking reinterpretation of the Great Depression. Rejecting the old emphasis on the New Deal, she turns to the neglected and moving stories of individual Americans, and shows how through brave leadership they helped establish the steadfast character we developed as a nation. Some of those figures were well known, at least in their day—Andrew Mellon, the Greenspan of the era; Sam Insull of Chicago, hounded as a scapegoat. But there were also unknowns: the Schechters, a family of butchers in Brooklyn who dealt a stunning blow to the New Deal; Bill W., who founded Alcoholics Anonymous in the name of showing that small communities could help themselves; and Father Divine, a black charismatic who steered his thousands of followers through the Depression by preaching a Gospel of Plenty.

Shlaes also traces the mounting agony of the New Dealers themselves as they discovered their errors. She shows how both Presidents Hoover and Roosevelt failed to understand the prosperity of the 1920s and heaped massive burdens on the country that more than offset the benefit of New Deal programs. The real question about the Depression, she argues, is not whether Roosevelt ended it with World War II. It is why the Depression lasted so long. From 1929 to 1940, federal intervention helped to make the Depression great—in part by forgetting the men and women who sought to help one another.

Authoritative, original, and utterly engrossing, The Forgotten Man offers an entirely new look at one of the most important periods in our history. Only when we know this history can we understand the strength of American character today.

“Amity Shlaes is among the most brilliant of the young writers who are transforming American financial journalism.” - Paul Johnson, author of Modern Times

“I could not put this book down. Ms. Shlaes timely chronicle of a fascinating era reads like a novel and brings a new perspective on political villains and heros—few of whom turn out to be as good or bad as history would have us believe.” - Arthur Levitt

“Americans need what Shlaes has brilliantly supplied, a fresh appraisal of what the New Deal did and did not accomplish.” - George F. Will

“The Forgotten Man is an incisive and controversial history of the Great Depression that challenges much of the received wisdom.” - Harold Evans, author of The American Century and They Made America

“The Forgotten Man offers an understanding of the era’s politics and economics that may be unprecedented in its clarity.” - Mark Helprin

“Shlaes’s account of The Great Depression goes beyond the familiar arguments of liberals and conservatives.” - William Kristol, Editor of The Weekly Standard

“Amity Shlaes’s fast-paced review of the [Depression] helps enormously in putting it all in perspective.” - Paul Volcker

“The Forgotten Man is an epic and wholly original retelling of a dramatic and crucial era. There are many sides to the 1930’s story, and this is the one that has largely been lost to history. Thanks to Amity Shlaes, now it’s been re-found.” - Peggy Noonan

“Entertaining, illuminating, and exceedingly fair. . . . A rich, wonderfully original, and extremely textured history of an important time. - The American Spectator

“A well-written and stimulating account of the 1930s and its often dubious orthodoxies. . . . Ms. Shlaes rightly reminds us of the harmful effect of Rooseveltian activism and class-warfare rhetoric.” - The Wall Street Journal

“The finest history of the Great Depression ever written. . . . Shlaes’s achievement stands out for the devastating effect of its understated prose and for its wide sweep of characters and themes. It deserves to become the preeminent revisionist history for general readers. . . . Her narrative sparkles.” - National Review

“Captivating. . . . Illuminating. . . . The Forgotten Man is an engaging read and a welcome corrective to the popular view of Roosevelt and his New Deal. . . . A refreshingly critical approach to Franklin Roosevelt’s policies.” - Clive Crook, The Financial Times

“Amity Shlaes tells the story of the Depression in splendid detail, rich with events and personalities. . . . Many of Shlaes’s descriptions make genuinely delightful reading.” - The New York Review of Books

“The Forgotten Man by Amity Shlaes will forever change how America understands the causes of the Depression and FDR’s policies that prolonged it for a decade.” - Grover G. Norquist, The American Spectator