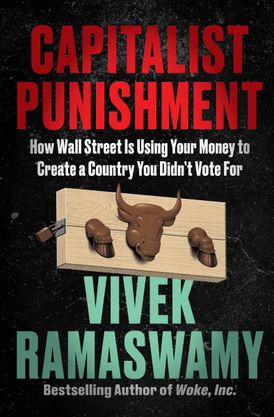 The New York Times bestselling author of Woke Inc.—an entrepreneur, rising cultural critic, and Fox News guest—explains how a new trend to contain the excesses of "greed-is-good" capitalism is being used to rob American citizens of their money and their vote.

In this timely book, Ramaswamy exposes how three Wall Street firms have quietly amassed more money than Jeff Bezos, Elon Musk, and John Rockefeller combined, and how these firms are wielding this enormous financial power across corporate America. These firms and their allies use the retirement funds of everyday Americans to vote for environmental and social agendas that most Americans reject. They package their agendas into cute 3-letter acronyms like “ESG,” but don’t fall for the trick: they’re using your money to exercise raw political power without the backstop of democratic accountability.

Worst of all, it’s a farce that betrays both liberals and conservatives. They force U.S. companies to adopt “racial equity audits” and “emissions caps” while supporting human rights atrocities in China. They coerce Western companies to produce less oil while shifting production to dirtier places like Russia. They charge exorbitant fees to mom-and-pop investors for so-called “sustainable” funds that are effectively identical to lower-fee index funds.

Usually when fraudsters use customer funds to advance their own goals, or when cartels coordinate to raise prices that harm consumers, they get prosecuted. But when elite financial institutions do the same thing, they’re celebrated as ESG heroes—at least so far. Capitalist Punishment lifts the veil on the largest fiduciary breaches, antitrust abuses, and First Amendment violations of the twenty-first century, misdeeds that are hiding in plain sight.

This isn’t just a threat to capitalism. It's a threat to democratic self-governance itself. Capitalist Punishment is an easy-to-follow educational tour de force for every participant in financial markets—which, to the surprise of most Americans, includes nearly every single one of them.

Other Works by Vivek Ramaswamy