A War Reporter's Mission to Make It Home 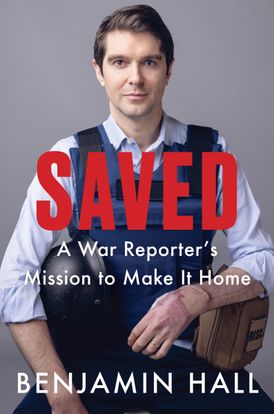 A War Reporter's Mission to Make It Home

Dispatches from the Edge meets In an Instant in this dramatic memoir of war, family, resilience, and recovery from Benjamin Hall, the Fox News journalist who was gravely injured by a Russian attack in the early days of the invasion of Ukraine.

When veteran war reporter Benjamin Hall woke up in Kyiv on the morning of March 14, 2022, he had no idea that, within hours, Russian bombs would nearly end his life. As a journalist for Fox News, Hall had worked in dangerous war zones like Syria and Afghanistan, but with three young daughters at home, life on the edge was supposed to be a thing of the past. Yet when Russia viciously attacked Ukraine in February 2022, Hall quickly volunteered to go; despite the risks, he knew that Americans needed to understand this world-altering conflict. A few weeks later, while on assignment, Hall and his crew were blown up in a Russian strike. With Hall himself gravely injured and stuck in Kyiv, it was unclear if he would make it out alive.

This is the story of how he survived—a story that continues to this day. For the first time, Hall shares his experience in full—from his ground-level view of the war to his dramatic rescue to his arduous, and ongoing, recovery. Going inside the events that have permanently transformed him, Hall recalls his time at the front lines of our world’s conflicts, exploring how his struggle to step away from war reporting led him back one perilous last time, and explaining how his years of experience kept him safe, right up until they failed him. Featuring nail-biting accounts from the many people across multiple countries who banded together to get him to safety, Hall offers a stunning look at complex teamwork and heartfelt perseverance that turned his life into a mission. He’d been telling war stories for years, and now, suddenly, he was one.

Through it all, Hall’s spirit has remained undaunted, buoyed by that remarkable corps of people from around the world whose collective determination ensured his survival—the former and current military personnel who rescued him, the medical staff who saved him, his coworkers who fought for his safe return, and his family who supported him at every turn. Ultimately, this trauma, the greatest of his life, serves as a pivotal reminder to us all of the fundamental goodness in the world, illuminating how the horrors of war can bring about the best in humanity. Evocative, harrowing, and deeply moving, Saved is a powerful memoir of family and friends, of life and healing, and of how to respond when you are tested in ways you never thought possible.

Other Works by Benjamin Hall