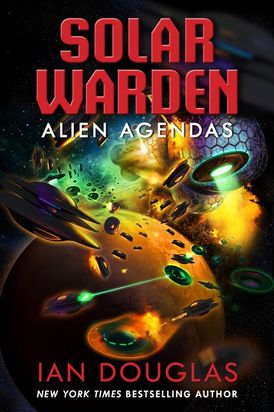 The Saurians, a highly evolved reptilian species which escaped extinction 65 million years ago, have an agenda: to achieve behind-the-scenes dominance over Earth. Operating from hidden bases, they use psychosocial techniques to plant conspiracy theories and instill fear within the human population. Too weak in numbers to militarily conquer a world they believe to be their own, they seek to renew Nazi strongman ideologies and surrogates to gain absolute control.

Their first attempt is thwarted by the Talis, time-traveling humans from the far future. Yet, their assistance is limited as they face an all-out time war that could sweep modern humanity and their futuristic society into oblivion.

With the human species in danger, Commander Mark Hunter and his Joint Space Strike Team must work alongside Talis agents, the U.S. Space Force, and a young and talented government psychic to stop the Saurians from world dominance.

As if saving earth wasn’t challenging enough, Hunter’s girlfriend, Jerry, was kidnapped by the infamous Men in Black to control him. Now Hunter has just one chance to find and rescue his love and the rest of the captives before the Saurians bring the entire base crashing down around him and his people.

Commander Mark Hunter and his crew require a miracle, and perhaps even that might not be enough…

“This ambitious series opener from Douglas...throws military sci-fi tropes and time-honored conspiracy theories into a blender to create a bonkers alternate present...Douglas gleefully combines an eclectic mix of conspiracies, among them Roswell Greys, humanoid lizards, and space-faring Nazis, while launching his characters into intergalactic battles with the skillful combat sequences fans well expect.” — Publishers Weekly on Alien Secrets

“Douglas does a good job keeping the action rolling along. The rapid-fire pace is just what some readers are looking for...The end sets up the next adventure in a very good way...There is more action and adventure to come, and that is a good thing.”  — SFRevu on Alien Secrets

“The complexity of the world building is breathtaking, especially considering the scope and breadth of space and time explored…. [The] mind of Ian Douglas is obviously a fascinating place! Some of his creations are Stephen King horror-worthy, while others are both fascinatingly unique and quite unexpected…Douglas does a marvelous job at blending together the past, present, and even the future as he crafts a science fiction story very unlike any other I’ve read. If you love alien-themed science fiction, then Ian Douglas has a real treat in store for you!” — Fresh Fiction on Alien Secrets

“The action is full-blooded and almost nonstop, yet the well-developed background is surprisingly rich and logical.”  — Kirkus Reviews (starred review) on Earth Strike

Ian Douglas is one of the many pseudonyms for writer William H. Keith, the New York Times bestselling author of the popular military science fiction series The Heritage Trilogy, The Legacy Trilogy, The Inheritance Trilogy, The Star Corpsman series, The Andromedan Dark series, and The Star Carrier series. A former naval corpsman, he lives in Pennsylvania.

Other Works by Ian Douglas

Star Strike: Book One of the Inheritance Trilogy