The Ship Beneath the Ice 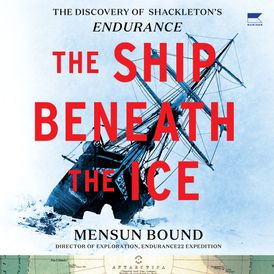 The Ship Beneath the Ice

The extraordinary firsthand account of the discovery of Ernest Shackleton’s Endurance, the ship that gave its name to the world’s most famous survival epic, told by the man who led the search.

On November 21, 1914, after sailing more than ten thousand miles from Norway to the Antarctic Ocean, the Endurance finally succumbed to the surrounding ice. Ernest Shackleton and his crew had navigated the 144-foot, three-masted wooden vessel to Antarctica to become the first to cross the barren continent, but early season pack ice trapped them in place offshore. They watched in silence as the ship’s stern rose twenty feet in the air and disappeared into the frigid sea, then spent six harrowing months marooned on the ice in its wake. Seal meat was their only sustenance as Shackleton’s expedition to push the limits of human strength took a new form: one of survival against the odds.

As this legendary story entered the annals of polar exploration, it inspired a new global race to find the wrecked Endurance, by all accounts “the world’s most unreachable shipwreck.” Several missions failed, thwarted, as Shackleton was, by the unpredictable Weddell Sea. Finally, a century to the day after Shackleton’s death, renowned marine archeologist Mensun Bound and an elite team of explorers discovered the lost shipwreck. Nearly ten thousand feet below the ice lay a remarkably preserved Endurance, its name still emblazoned on the ship’s stern.

The Ship Beneath the Ice chronicles two dramatic expeditions to what Shackleton called “the most hostile sea on Earth.” Bound experienced failure and despair in his attempts to locate the wreck, and, like Shackleton before him, very nearly found his vessel frozen in ice.

This inspiring modern-day adventure narrative captures the intrepid spirit that joins two mariners across the centuries—both of whom accomplished the impossible.

MENSUN BOUND was Director of Exploration on the 2019 and 2022 expeditions to locate Shackleton’s Endurance. Previously Triton Fellow in Maritime Archaeology at St. Peter’s College, Oxford University, he is a leading marine archeologist who has discovered many of the world’s most famous shipwrecks.

Other Works by Mensun Bound