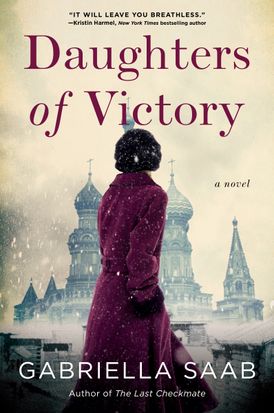 From the acclaimed author of The Last Checkmate comes a brilliant novel spanning from the Russian Revolution to the Nazi occupation of the Soviet Union and following two unforgettable women…their fates intertwined by ties of family and interrupted by the tragedy of war. Perfect for readers of Kate Quinn, Pam Jenoff, and Elena Gorokhova.

Russia 1917: Beautiful, educated Svetlana Petrova defied her stifling aristocratic family to join a revolution promising freedom. Now, released after years of imprisonment, she discovers her socialist party vying for power against the dictatorial Bolsheviks and her beloved uncle, a champion of her cause, was murdered by a mysterious assassin named Orlova. Her signature? Blinding her victims before she kills them. Svetlana resolves to avenge his death by destroying this vicious opponent, even as she longs to reunite with the daughter she has not seen in years.

USSR 1941: Now living in obscurity in a remote village, Svetlana opens her home to Mila Rozovskaya, the eighteen-year-old granddaughter from Leningrad she has never met. She hopes to protect Mila from the oncoming Nazi invasion, but when the enemy occupies the village, Svetlana sees the young woman fall under the spell of the resistance—echoing her once-passionate idealism. As Mila takes up her fight, dangerous secrets and old enemies soon threaten all Svetlana holds dear. To protect her family, she must confront her long-buried past—yet if the truth emerges victorious, it holds the power to save or shatter them. A risk Svetlana has no choice but to take.

"Daughters of Victory is an action-packed, gripping read of revolution, war, and the complexities of family and love among strife. I loved The Last Checkmate and Gabriella Saab has done it again with this powerful and wonderfully researched historical fiction that readers will love!"  — Madeline Martin, New York Times Bestselling Author of The Last Bookshop in London

"Gabriella Saab's Daughters of Victory is a sweeping, meticulously researched recounting of two key moments in Russian and Soviet history. Captivating from start to end, historical fiction lovers will delight in this epic saga. Not to be missed!" — Aimie K. Runyan, bestselling author of The School for German Brides

"Expansive in scope yet intimate in its portrayal of two extraordinary women connected not only by blood but by a fiercely beautiful love for their motherland and their families, Gabriella Saab's Daughters of Victory is like a faded picture of a lost time coming back into brilliant focus, all at once vibrant, alive, and deeply emotional, leaving your heart pounding too fast as you breathlessly turn the pages to the story's stunning, surprising conclusion." — Olesya Salnikova Gilmore, author of The Witch and the Tsar

"A gripping story of revolution, war, and two headstrong women fighting for their country. Daughters of Victory brings Russian history vividly to life, including the secrets and sacrifices so many endured in order to survive." — Elizabeth Blackwell, author of Red Mistress and On a Cold Dark Sea

“Gabriella Saab does not disappoint with Daughters of Victory, which is as meticulously researched and spectacularly written as The Last Checkmate. This is a bold, ambitious novel that is also deeply intimate and emotional, with rich historical settings, gripping suspense, and flawed but impressive characters. I was blown away by this complex, engrossing read.” — Addison Armstrong, author of The War Librarian

"A former aristocrat who embraced the uprising in 1905 Russia shepherds her granddaughter through similar difficult choices during the 1941 Nazi invasion of the Soviet Union in the engrossing latest from Saab (after The Last Checkmate)… Saab brings a magnetic authenticity to the proceedings as her richly drawn characters make life and death decisions. Historical fiction fans will be riveted.” — Publishers Weekly

"From the strategic opening move of The Last Checkmate, I was in the grip of an unforgettable story. Vivid prose and heart-stopping scenes, Saab unfolds the story like her protagonist plays chess, with cunning wit and brilliant strategy. Gabriella Saab’s debut is immersive, smart, and haunting—a do-not-miss WWII historical novel.” — Patti Callahan, New York Times bestselling author of Surviving Savannah

“Just wow! I was speechless when I finished reading this book. Raw and powerful in its humanity, The Last Checkmate will break your heart and stitch it back together again. Gabriella Saab has given us a rare and wondrous gift. A must-read for all historical fiction lovers.” — Sara Ackerman, USA Today bestselling author of The Radar Girls

"What's the best strategy to survive in a place as evil as Auschwitz? For Maria, a young member of the Polish resistance in Gabriella Saab's debut The Last Checkmate, chess is a lifeline... The Last Checkmate kept me turning pages long into the night. A fantastic debut!" — Anika Scott, international bestselling author of The German Heiress

"The Last Checkmate is a winner. Gabriella Saab’s debut kept me turning the pages and I was rooting for our young, brave, and resourceful chess prodigy every step of the way." — Elise Hooper, acclaimed author of Sisters of the Pacific

“A compelling and raw journey through the mind of a young Polish woman who comes of age in Auschwitz and lives only for revenge against her family’s killer.”  — Sara Dahmen, author of Tinsmith 1865

“Still thinking about The Queen’s Gambit? Then The Last Checkmate by Gabrielle Saab is the book for you.” — PopSugar

“Saab’s capable debut features a revenge plot set amidst the horrors of the Holocaust... Readers who love WWII fiction with strong female leads should check this out.” — Publishers Weekly on The Last Checkmate

Gabriella Saab graduated from Mississippi State University with a bachelor of business administration in marketing and now lives in her hometown of Mobile, Alabama, where she works as a barre instructor. While researching The Last Checkmate, she traveled to Warsaw and Auschwitz to dig deeper into the setting and the experiences of those who lived there. The Last Checkmate is her first novel.

Other Works by Gabriella Saab