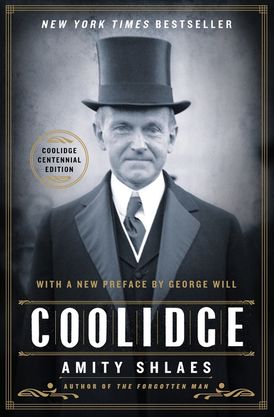 “America’s 30th president has been much misunderstood. . . . Shlaes’s biography provides a window onto an unfairly tarnished period. It deserves to be widely read.”—The Economist

Timed to the centennial of the Calvin Coolidge presidency, an updated edition of Amity Shlaes’s brilliant and provocative New York Times bestselling biography examines an underrated chief executive who offered a model of presidential service strikingly different from that seen in America today. This new edition features a preface by Washington Post columnist George F. Will.

Seemingly unbreachable political divisions, war and pandemic, unrest in cities, a budgetary crisis, economic disruption –all troubles we confront today—also challenged America a century ago. When President Warren Harding passed away suddenly in 1923, America seemed to be heading deeper into uncertainty. Many considered the vice president who suddenly succeeded Harding, the modest Silent Cal, a mere lame duck. Yet over the course of the 1920s, through breathtaking discipline and determination, this unexpected president set America on a new course and restored the nation’s confidence in itself.

In this magisterial biography, bestselling author Amity Shlaes traces Coolidge’s dramatic story, and the roots of his strength, from a childhood in a New England hamlet to his rise from town lawmaker to governor of Massachusetts and his dramatic handling of the Boston Police strike. Through bipartisanship, civility, and sheer perseverance, the thirtieth president ended the era of crisis and delivered both a solvent government and a better life to working Americans.

More importantly, Coolidge carefully rebuilt Americans’ trust our own government. As Shlaes shows, Coolidge led by example, inspiring Americans to cast away irony and anger. Elected on his own in 1924, Coolidge seemed set for reelection in 1928. Yet a fateful trip to South Dakota—where he observed the great profiles of other Presidents being sculpted at Mount Rushmore—coincided with Coolidge’s greatest demonstration of presidential character. Precisely because he believed service more important than glory, as Shlaes records, Coolidge made a sacrifice rare for a popular president, and announced he would not run again.

At once a revision of a leader and a decade, this dramatic biography, complete a new preface from George F. Will, Coolidge captures the remarkable and again timely story of a rare president whose leadership couldn’t be timelier today.

“History has paid little attention to the achievements of Coolidge because he seemed to be unduly passive. Yet Amity Shlaes, as his biographer, exposes the heroic nature of the man and brings to life one of the most vibrant periods in American economic history.” — Alan Greenspan

“To read Amity Shlaes’s well-crafted biography is to understand why Reagan so admired the famously reticent man whom Shlaes calls ‘our great refrainer.’” — George Pelecanos, on Northline

“Amity Shlaes’s extraordinary biography describes how a single politician can change an entire political culture -- a story with plenty of echoes today. Alice Roosevelt Longworth, doyenne of the Washington salons, first disdained Coolidge, then admired him. After reading Coolidge, every reader will, too.” — Anne Applebaum

“A marvelous book that is in many respects as subtle and powerful as Coolidge himself. Shlaes’s masterly command of economics, policy, and personal portraiture illustrates the times, talents, character, and courage of the consummate New Englander.” — Bookshelf

“Coolidge is a welcome new biography of a great American president. Amity Shlaes shines fresh light on a leader of humble persistence who unexpectedly found himself in the presidency and whose faith in the American people helped restore prosperity during a period of great turmoil. Amidst today’s economic hardships and an uncertain future, Shlaes illuminates a path forward -- making Coolidge a must-read for policymakers and citizens alike.” — Paul Ryan

“Timely and important. . . . The research is exhaustive, and the political and economic analysis sound.” — Wall Street Journal

“With a deft finger on today’s conservative pulse, Shlaes portrays Calvin Coolidge as a paragon of a president by virtue of his small-government policies.” — The New York Times Book Review -- Editor's Choice

“Amity Shlaes’s rich new biography reminds us that Calvin Coolidge must not be forgotten in our era of staggering government deficits and poisoned political rhetoric. . . . A finely muted drama.” — USA Today

“America’s 30th president has been much misunderstood. . . . Shlaes’s biography provides a window onto an unfairly tarnished period. It deserves to be widely read.” — The Economist

“Shlaes impresses readers with the single-mindedness of Coolidge’s pursuit. . . . For the next decade or so, it may be Amity Shlaes who has custody of Coolidge’s reputation.” — New Yorker

Shlaes chairs the board of the Calvin Coolidge Presidential Foundation and the Manhattan Institute’s Hayek Book Prize, and serves as a scholar at the King’s College. Twitter: @amityshlaes