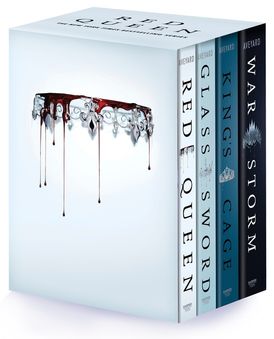 This paperback box set is the perfect gift for fans looking to rediscover this phenomenal series, and for new readers eager to delve into the dark and dangerous world of Red Queen—where no one is as they appear, and the only certainty is betrayal.

With every book in the blockbuster series featured in this stunning package, readers can follow this series from the spark that began everything, all the way to the electrifying conclusion.

Praise for the Red Queen series:

“The action hits the ground running and doesn’t stop until after the last page is turned.” — School Library Journal

Praise for the Realm Breaker series:
?"The entire time I was reading REALM BREAKER, I wanted one thing: for the book to never end. It is classic yet groundbreaking, romantic yet edgy, a rollicking adventure that carries you along at a relentless pace. A true fantasy masterpiece."  — Sabaa Tahir, #1 New York Times bestselling author of the An Ember in the Ashes series.