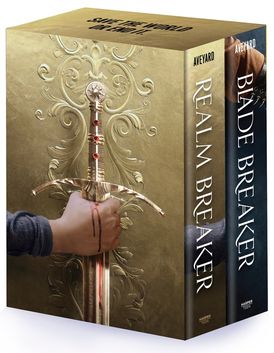 A SQUIRE, forced to choose between home and honor.

AN IMMORTAL, avenging a broken promise.

AN ASSASSIN, exiled and bloodthirsty.

AND A PIRATE’S DAUGHTER, the Ward’s last hope.

Together they stand against a vicious opponent, invincible and determined to burn all kingdoms to ash, and an army unlike anything the realm has ever witnessed.

With these two opening titles in the Realm Breaker trilogy in this box set, readers can follow Corayne and her unlikely companions on a powerful journey. With breakneck action, impossible thrills, lethal surprises, and an unstoppable enemy, this series asks the ultimate question: when the heroes have fallen, who will take up the sword?

Praise for the Realm Breaker series:

"A fantasy fan's dream." —Roseanne A. Brown, New York Times bestselling author of A Song of Wraiths and Ruin

“[Blade Breaker] builds to a nail-biting reckoning of a climax. Will leave readers gasping for more.”  —Kirkus

"The entire time I was reading REALM BREAKER, I wanted one thing: for the book to never end. It is classic yet groundbreaking, romantic yet edgy, a rollicking adventure that carries you along at a relentless pace. A true fantasy masterpiece."  — Sabaa Tahir, #1 New York Times bestselling author of the An Ember in the Ashes series.

"Set in a sprawling world of warring empires and hair-raising magic that any reader would want to get lost in, REALM BREAKER is a fantasy fan's dream, injected with Aveyard's trademark action, heart, and razor-sharp characters." —  Roseanne A. Brown, New York Times Bestselling Author of A Song of Wraiths and Ruin

"Aveyard’s “little lightning girl” remains a relatable and deeply flawed heroine... Aveyard adeptly sets the scene for a fourth book to follow, amid a war not yet won.”    — Publishers Weekly