One Jump at a Time 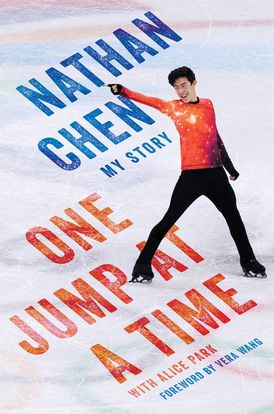 One Jump at a Time

In this exhilarating memoir, three-time World Champion and Olympic gold-medalist Nathan Chen tells the story of his remarkable journey to success, reflecting on his life as a Chinese American figure skater and the joys and challenges he has experienced—including the tremendous sacrifices he and his family made, and the physical and emotional pain he endured.

When three-year-old Nathan Chen tried on his first pair of figure skates, magic happened. But the odds of this young boy—one of five children born to Chinese immigrants—competing and making it into the top echelons of figure skating were daunting. Chen’s family didn’t have the resources or access to pay for expensive coaches, rink time, and equipment. But Nathan’s mother, Hetty Wang, refused to fail her child. Recognizing his tremendous talent and passion, she stepped up as his coach, making enormous sacrifices to give Nathan the opportunity to compete in this exclusive world.

That dedication eventually paid off at the 2022 Olympic Games in Beijing, where Chen—reverently known as the “Quad King”—won gold, becoming the first Asian-American man to stand at the highest podium in figure skating. In this moving and inspiring memoir Chen opens up for the first time, chronicling everything it took to pursue his dreams. Bolstered by his unwavering passion and his family’s unconditional support, Chen reveals the most difficult times he endured, and how he overcame each obstacle–from his disappointment at the 2018 Olympic Games, to competing during a global pandemic, to the extreme physical and mental toll the sport demands.

Pulling back the curtain on the figure skating world and the Olympics, Chen reveals what it was really like at the Beijing Games and competing on the US team in the same city his parents had left—and his grandmother still lived. Poignant and unfiltered, told in his own words, One Jump at a Time is the story of one extraordinary young man—and a testament to the love of a family and the power of persistence, grit, and passion.

Shattering records and pushing the sport further than ever before, Nathan is a legend and icon in the figure skating world. — Serena Williams

Watching Nathan Chen develop from a young, determined skater to a gold-medal–winning Olympian has been a gift. I have no doubt that the Quad King’s influence on the sport will impact generations to come. — Michelle Kwan

The terms Olympic gold medalist and world champion only begin to describe Nathan Chen. He is as impressive, intelligent, and inspirational as any athlete you will come across. We are lucky that after sharing his skating genius with us, he is now sharing his story. — Mike Tirico, Host of NBC Olympics Primetime

Blending history-making gold medals and cultural commitment to multicultural communities is all-too-rare: it’s something young generations have come to expect, something that Nathan has always embodied, and something that continues to inspire all of us. — Bing Chen, CEO and Cofounder of Gold House 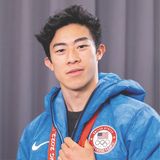 Nathan Chen is a twenty-three-year-old American Olympic figure skater. He began skating at the age of three in his hometown of Salt Lake City after watching his two older brothers play hockey and his older sisters compete in figure skating. He has also trained in competitive gymnastics and ballet. At the 2017 U.S. Figure Skating Championships, Nathan became the first man in figure skating history to land five quadruple jumps in a single performance, and is the first Asian-American male skater to win U.S., World, and Olympic titles. He was named the 2019 Team USA Male Olympic Athlete of the Year and was included in the 2019 Forbes’ 30 Under 30 list. Nathan is currently a student at Yale University, and in his spare time, plays the guitar and piano and enjoys basketball and tennis. He lives in Lake Forest, California.

Other Works by Nathan Chen