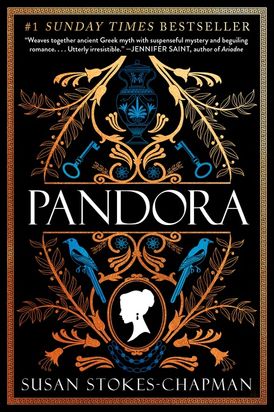 Prepare to lift the lid on a lush reimagination of the mythological Pandora….Susan Stokes-Chapman’s atmospheric debut, PANDORA, immerses the reader in the dangerous, mysterious world of ancient antiquities with prose that is elegant and teeming with visceral sensory detail. A marvelous debut—imaginative, ambitious, and begging to be savored."   — Sarah Penner, New York Times bestselling author of The Last Apothecary

Steeped in mystery and rich in imagination, an exhilarating historical novel set in Georgian London where the discovery of a mysterious ancient Greek vase sets in motion conspiracies, revelations, and romance.

London, 1799. Dora Blake, an aspiring jewelry artist, lives with her odious uncle atop her late parents’ once-famed shop of antiquities. After a mysterious Greek vase is delivered, her uncle begins to act suspiciously, keeping the vase locked in the store’s basement, away from prying eyes—including Dora’s. Intrigued by her uncle’s peculiar behavior, Dora turns to young, ambitious antiquarian scholar Edward Lawrence who eagerly agrees to help. Edward believes the ancient vase is the key that will unlock his academic future; Dora sees it as a chance to establish her own name.

But what Edward discovers about the vase has Dora questioning everything she has believed about her life, her family, and the world as she knows it. As Dora uncovers the truth, she comes to understand that some doors are locked and some mysteries are buried for a reason, while others are closer to the surface than they appear.

A story of myth and mystery, secrets and deception, fate and hope, Pandora is an enchanting work of historical fiction as captivating and evocative as The Song of Achilles, The Essex Serpent, and The Miniaturist.

"With a nod to Pandora’s mythical box, Stokes-Chapman artfully imagines a world where greed, violence and hatred have run rampant, and envisions their ramifications for a disadvantaged young woman trying to find her way." — Washington Post

"Prepare to lift the lid on a lush reimagination of the mythological Pandora. . . . Susan Stokes-Chapman’s atmospheric debut, Pandora, immerses the reader in the dangerous, mysterious world of ancient antiquities with prose that is elegant and teeming with visceral sensory detail. A marvelous debut—imaginative, ambitious, and begging to be savored." — Sarah Penner, New York Times bestselling author of The Last Apothecary.

"A gripping narrative in which secrets from the past are slowly and ingeniously revealed" — Sunday Times, *Historical Fiction Book of the Month*

"Stokes-Chapman immerses the reader in late-eighteenth-century London, and Dora is a character to root for as she seeks independence from her uncle. This moody debut will appeal to fans of The Essex Serpent and The Miniaturist." — Booklist

“Chapman’s debut transports readers to late-18th-century England for a story laced with Greek mythology and superstition. . . . Immersive period details and a steadily simmering mystery combine with just a hint of myth and magic to keep the pages flying. Fans of Madeleine Miller’s Circe and Natasha Pulley’s The Watchmaker of Filigree Street will find plenty to enjoy here." — Publishers Weekly

"Brimming with authentic Georgian detail and richly imagined characters, Pandora is a dazzling page-turner of a debut! Enticing, surprising and full of mystery, if you're a fan of The Binding or Daughters of Night, then you'll love Pandora." — Joanne Burn, author of The Hemlock Cure

"An utterly compelling, convincing piece of historical fiction, threaded through with a dash of mythology. Readers will be rooting for Dora from the start, and spellbound as the story unfolds. I loved it." — Elizabeth Lee, author of Cunning Women

"Sumptuous, hypnotic and unforgettable. This beautifully told story of Gothic Georgian London is filled with mesmeric wonder, compelling mysteries and fascinating characters. I loved every page of it." — B. P. Walter, author of The Dinner Guest

"If you like a novel steeped in great characters, a Gothic Georgian London, a world of antiquities and myth - this is an absolute winner. I loved it!" — Essie Fox

"Delicious, intriguing and original...unfolds beautifully into a cracking finale." — Liz Hyder, author of The Gifts

"This novel is a work of genius. Beautifully written and perfectly plotted with a heroine you'll fall in love with. It richly describes Georgian London and weaves character study and gorgeous setting and Greek mythology into a perfect book. One of the best historical novels I've ever read." — Christina Sweeney-Baird

"A complete and utter joy of a book. I adored the characters and it was an incredibly atmospheric read. The evocation of eighteenth century London was beautifully done, the mystery kept me turning the pages and the love story captured my heart. My only complaint was I didn't want it to end!" — Elodie Harper, bestselling author of The Wolf Den

"A gleaming and brilliant novel of history, mystery and mythology set in Georgian London...a real gem of a debut." — Anna Mazzola

"Pandora is such an immersive debut - an intriguing mystery, lavish with Georgian detail and tantalizing hints of another world." — Kate Mascarenhas, author of The Psychology of Time

“Stokes-Chapman can write fascinating, three-dimensional characters. . . . Extensive research brings the period so much to life you can taste it. . . . Pandora is a readable, solid debut.”  — The Guardian

Susan Stokes-Chapman is a writer based in North Wales. She grew up in the Georgian city of Lichfield, before spending four years in the town of Aberystwyth and graduating with a BA in Education and English Literature and an MA in Creative Writing. Her debut novel PANDORA was published in the UK in January 2022 and became an instant #1 bestseller; the novel was previously shortlisted for the 2020 Lucy Cavendish Fiction Prize and longlisted for the Bath Novel Award. Twitter: @SStokesChapman, Instagram: sstokeschapman, www.susanstokeschapman.com

Other Works by Susan Stokes-Chapman