The Education of a Mother's Son 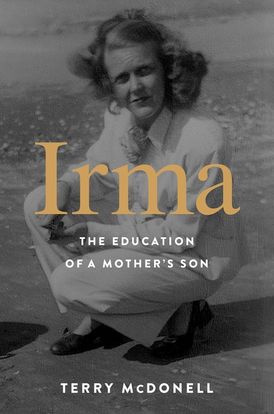 The Education of a Mother's Son

A son’s lessons from his single mother—a twenty five year old widow who took control of her life, defied expectations and raised him into a manhood of his own—from the author of the acclaimed The Accidental Life.

As a child, Terry McDonell imagined epic stories about his father, a fighter pilot who died in World War II. But, as he discovers in this dazzling memoir, the real hero in his life was his mother, Irma, who moved with him to California hoping for a new life and raised him through difficult times.

Like most headstrong boys growing up in mid-century America, McDonell took his mother for granted, never giving her life much thought. He was bright, cocky, and determined to make his own way, separate from her and from his complicated roots. But as he matured, built a career, married, divorced, remarried, and raised his own sons, McDonell came to see that Irma had lived her life in a way that allowed him to discover what he wanted his own life to be. The person he was would be forever tied to Irma’s courage and wisdom and love. From his recollections—a series of colorful, deeply personal, sometimes funny, stunningly composed vignettes—an intriguing and poignant portrait emerges.

Irma is the story of a formidable woman who built the life she wanted as she raised her son to be the kind of man and father he had longed for but never knew.

“I found myself going slower and slower as the book went on because I didn’t want it to end. Like This Boy’s Life, I won’t forget Irma." — Mona Simpson

"An engaging young widow raises a troubled son; the son, prone to self-examination, grows to manhood spiritually redeemed by his wise and self-sufficient mother—compulsively readable and filled with useful truths about our unpredictable lives." — Thomas McGuane

"More than a beautiful story, Irma pulls emotion out of childhood memory to find insight into the bond of love between mother and son. Precise, elegant, glittering; this book is a diamond." — Susan Casey

“McDonell has an uncanny ability to reflect a child’s view of big and small events unfolding, and yet there is always the pentimento of adult empathy and irony lightly glazing over the scenes—superb and unique writing.” — Shelby Coffey

Other Works by Terry McDonell