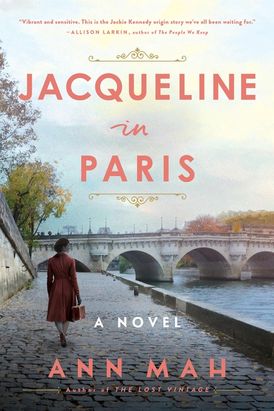 From the bestselling author of The Lost Vintage, a rare and dazzling portrait of Jacqueline Bouvier's college year abroad in postwar Paris, an intimate and electrifying story of love and betrayal, and the coming-of-age of an American icon – before the world knew her as Jackie.

In September 1949 Jacqueline Bouvier arrives in postwar Paris to begin her junior year abroad. She's twenty years old, socially poised but financially precarious, and all too aware of her mother's expectations that she make a brilliant match. Before relenting to family pressure, she has one year to herself far away from sleepy Vassar College and the rigid social circles of New York, a year to explore and absorb the luminous beauty of the City of Light. Jacqueline is immediately catapulted into an intoxicating new world of champagne and châteaux, art and avant-garde theater, cafés and jazz clubs. She strikes up a romance with a talented young writer who shares her love of literature and passion for culture – even though her mother would think him most unsuitable.

But beneath the glitter and rush, France is a fragile place still haunted by the Occupation. Jacqueline lives in a rambling apartment with a widowed countess and her daughters, all of whom suffered as part of the French Resistance just a few years before. In the aftermath of World War II, Paris has become a nest of spies, and suspicion, deception, and betrayal lurk around every corner. Jacqueline is stunned to watch the rise of communism – anathema in America, but an active movement in France – never guessing she is witnessing the beginning of the political environment that will shape the rest of her life—and that of her future husband.

Evocative, sensitive, and rich in historic detail, Jacqueline in Paris portrays the origin story of an American icon. Ann Mah brilliantly imagines the intellectual and aesthetic awakening of Jacqueline Bouvier Kennedy Onassis, and illuminates how France would prove to be her one true love, and one of the greatest influences on her life.

“In Jacqueline in Paris, Ann Mah brilliantly imagines what life was like in 1949 for a college student named Jacqueline Bouvier as she embarked on her junior year abroad. The alluring descriptions of postwar Paris (the food, the scenery) will make you want to hop on a plane, and the compelling storyline, set amid the rise of the Communist movement in France, is made even more thrilling by the fact that we know where this particular woman is headed.” — Real Simple

"In beautiful prose with loving attention to detail Mah expertly evokes Jacqueline Bouvier’s heady year abroad, one that she later considered the happiest of her life." — Toronto Star

Delightful...Mah smoothly walks the line between biography and fiction. Fans of the former first lady and Paris should be beguiled." — Kirkus Reviews (starred review)

“Mah (The Lost Vintage) imagines the education of Jacqueline Bouvier in 1949 Paris in this sumptuous outing. … Mah brings insight and vivid details to young Jacqueline Bouvier’s adventurous spirit. Historical fiction fans will be drawn like moths to a flame.” — Publishers Weekly

"Mah’s exemplary mix of literary and journalistic skills pays off in this extensively researched novel about the woman who became America’s most iconic and enigmatic first lady.” — Booklist

“Vibrant and sensitive. This is the Jackie Kennedy origin story we’ve all been waiting for.” — Allison Larkin, author of The People We Keep

"Jacqueline in Paris is a triumph of storytelling: breathless, sensual, rigorously researched, and with twists that will leave readers thirsting for more. Like the city that serves as its setting, the novel immerses the reader in an environment both intimately familiar and utterly new. A brilliant novel more than worthy of its intriguing subject." — Bruce Holsinger, USA Today-bestselling author of The Gifted School and The Displacements

“Before she became the First Lady, Jacqueline Bouvier had the hopes and dreams of all of us in our youth. In this enchanting, engrossing tale of her time in Paris, we discover the young woman whose ambitions propel her to the City of Light, seduced by jazz and haunted by the recent Occupation. Romance collides with newfound maturity as Jackie paves the path to her later global fame. Ann Mah’s sensitive portrayal of a woman on the cusp of inevitable change is vivid and unputdownable.” — C.W. Gortner, author of Mademoiselle Chanel

"It is 1949. A young Jacqueline Bouvier has a year to find herself while studying abroad, and in Mah's talented hands, readers find themselves captivated. Jacqueline in Paris beautifully captures the soul of a city as well as the spirit of a remarkable woman."  — Steven Rowley, bestselling author of The Editor and The Guncle

"Before there was Camelot, there was a Vassar student in Paris. Ann Mah's Jacqueline in Paris paints a beautiful, richly textured portrait of both a woman and an era. Some novels are windows into a life, letting you peer through a glass; Jacqueline in Paris is an open door, inviting you to walk along with Jacqueline as she explores France, filtering myth from reality, and discerning the true strengths of both her adopted country and her own character. This book is the very best of biographical fiction!" — Lauren Willig, New York Times bestselling author of Band of Sisters

“Jacqueline in Paris beautifully evokes postwar Paris. The details are exquisite, and Mah’s writing shines in its close attention to place and sensory details. In bringing Jacqueline Bouvier’s transformative Paris interlude to the page, Mah offers readers a lovely, immersive visit to a vanished city.” — BookPage

“In this coming-of-age novel, Ann Mah imagines what life was like for Bouvier prior to her time in the White House.” — Town & Country

Ann Mah is an American food and travel writer. She is the author of the USA Today and Wall Street Journal bestseller The Lost Vintage, as well as three other books. She contributes regularly to the New York Times Travel section, and her articles have appeared in the Washington Post, Condé Nast Traveler, The Best American Travel Writing, The New York Times Footsteps, Washingtonian magazine, Vogue.com, BonAppetit.com, Food52.com, TheKitchn.com, and other publications.

Other Works by Ann Mah