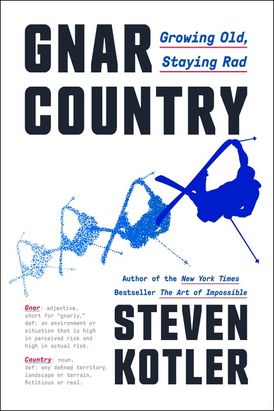 The New York Times bestselling author and human performance expert tests his knowledge and theories on his own aging body in a quest to become an expert skier at age fifty-three.

Gnar: adjective, short for “gnarly,” def: any environment or situation that is high in perceived risk and high in actual risk.

Cutting-edge discoveries in embodied cognition, flow science, and network neuroscience have revolutionized how we think about peak performance aging. On paper, these discoveries should allow older athletes to progress in supposedly “impossible” activities like park skiing (think: jumps and tricks.) To see if theory worked in practice, Kotler conducted his own ass-on-the-line experiment in applied neuroscience and later-in-life skill acquisition: He tried to teach an old dog some new tricks.

Recently, top pros have been performing well past a previously considered prime: World-class athletes such as Kelly Slater, the greatest surfer of all time, is winning competitions in his fifties; Tom Brady can beat players half his age. But what about the rest of us?

Steven Kotler has been studying human performance for thirty years, and taught hundreds of thousands of people at all skill levels, age groups, and walks of life, how to achieve peak performance. Could his own advice work for him?

Gnar Country is the chronicle of his experience pushing his own aging body past preconceived limits. It’s a book about goals and grit and progression. It’s an antidote for weariness that is inspiring, practical, and, often hilarious. It is about growing old and staying rad. It’s a feverish reading experience that makes you put down the book, get out there, and move. Whether hurtling down a mountain side, running your first 10K race, or taking your career to new heights, Kotler challenges us to test ourselves, surpass our limits, and achieve our own impossible, whatever it might be. Part personal journey, part science experiment, part how-to guide, Kotler takes us on his punk rock, high-velocity joy-ride for a better life in spite—and often in defiance of—the perceived limitations of the aging human body.

"Gnar Country is a tour-de-force! Startling discoveries about peak performance aging, deep insights into h?uman psychology, and a wonderfully written, laugh-out-loud, page-turning adventure story—only Steven Kotler could dream up and pull off a book this ambitious, smart, and useful!" — Peter Diamandis, founder of the XPRIZE, cofounder of Singularity University, and New York Times bestselling author

"There are so many who write, but don’t do. Not Steven Kotler—he is the antithesis of an “armchair expert,” a man who always lives what he writes, and in the case of Gnar Country, writes what he lives. In this refreshingly raw narrative, Kotler personally proves that aging is actually a gateway to exploring new levels of our performance potential—and shows us how to do it. Gnar Country gets you excited to grow older!" — Rich Diviney, retired Navy SEAL commander and bestselling author of The Attributes: 25 Hidden Drivers of Optimal Performance

“This book is a trail map for anyone who’s driven to be better at anything. I laughed, winced, and flowed right along with Kotler on his audacious quest to perform at his absolute best at an age when decline seems to be the accepted norm. Screw what people say you can or can’t do past 50...This joyride of a story leaves you with just enough science-backed practical tools to take you where no one believes you can go. If he can shatter his own belief of what’s possible, so can you.” — Rebecca Rusch, 7x world champion ultra-endurance athlete and author of Rusch to Glory

"At an age when many adults have already checked into the sofa ride, Steven Kotler went back to school—the old school, the hard knocks school. His innate curiosity, combined with decades of sensitivity and self-awareness drew meaningful lessons from difficult and dangerous situations. Age-associated physical and psychological decline appears inevitable, but Steven demonstrates a different Way, and encourages us all to hold ‘em, not fold ‘em. After all, there will be nothing worse than knowing you could have but didn’t, that now you can't and you're still alive to wish you had." — Mark Twight, alpinist, author, podcast host, and physical trainer (300, Man of Steel, and The Justice League)

Steven Kotler is a New York Times bestselling author, an award-winning journalist, and the Executive Director of the Flow Research Collective. He is one of the world’s leading experts on human performance. He is the author of nine bestsellers (out of thirteen books total), including The Art of Impossible, The Future Is Faster Than You Think, Stealing Fire, The Rise of Superman, Bold and Abundance. His work has been nominated for two Pulitzer Prizes, translated into over 40 languages, and appeared in over 100 publications, including the New York Times Magazine, Wired, Atlantic Monthly, TIME and the Harvard Business Review. Steven is also the cohost of Flow Research Collective Radio, a top ten iTunes science podcast. Along with his wife, author Joy Nicholson, he is the cofounder of the Rancho de Chihuahua, a hospice and special needs dog sanctuary.

Other Works by Steven Kotler

The Art of Impossible