A Story of Glitter, Glam Rock, and Loving Lou Reed 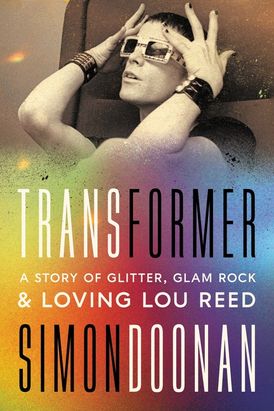 A Story of Glitter, Glam Rock, and Loving Lou Reed

In this funny and poignant memoir and cultural history, the television personality, columnist, and author of Drag pays homage to Lou Reed’s groundbreaking album Transformer on its fiftieth anniversary and recalls its influence on his coming of age and coming out through glam rock.

In November 1972, Lou Reed released his album, Transformer because he thought it was “dreary for gay people to have to listen to straight people’s love songs.” That groundbreaking idea echoed with the times. That same year, Sweden was the first country to legalize gender-affirming surgery, and San Francisco struck down employment discrimination based on sexual orientation.

Sometimes an artistic creation perfectly aligns with a broader social and political history, and Transformer—with the songs “Walk on the Wild Side,” “Perfect Day,” and “Vicious”—perfectly captured its time. “Walk on the Wild Side” was banned on radio across the country but became a massive hit when young people threatened to boycott stations that would not play it. The album's cover featured a high-contrast image of Lou, flaunting a new mascara'd glamrock incarnation, shot by legend Mick Rock, thereby underscoring his intention to create "a gay album."

In Transformer, Doonan tells the story of how Lou Reed came to make the album with the help of David Bowie, and places its creation within the course of Reed’s life. Doonan offers first-hand testimony of the album’s impact on the LGBTQ+ community, recalling how it transformed his own life as a 20-year-old working class kid from Reading, England, who had just discovered the joys of London Glam Rock and was sparked by the artistic freedom of Warhol’s The Factory. Transformer was a revelation—hearing Reed’s songs, Doonan understood how the world was changing for him and his friends.

A poignant, personal addition to modern music and LGBTQ+ history, Transformer captures a pivotal moment when those long silenced were finally given a voice. As transgender icon Candy Darling, highlighted in his lyrics, told Reed, “It’s so nice to hear ourselves.”

“Doonan’s blend of personal reflection and cultural history offers a unique, entertaining, and fascinating portrait of a rock masterpiece that will be appreciated by music fans as well as those interested in LGBTQ+ social history.” — Library Journal

“Doonan's droll, concise yet action-packed hosanna to the personal and salutary joys of Lou Reed's glam rock classic Transformer. Both Simon and I were, in effect, created by everything Transformer stood and stands for.”
— John Cameron Mitchell, creator of Hedwig and the Angry Inch, Shortbus and How to Talk to Girls at Parties.

“Simon Doonan makes this tale of glam-rock cultural revolution soar like a love song. Transformer is more than just the story of Lou Reed—it’s the story of how pop music's rebels and outsiders can change the world, by envisioning a more seductive future. Doonan turns it into a dazzlingly brilliant, deeply personal, totally revelatory epic—a Seventies story that somehow seems perfect for our moment right now.”
— Rob Sheffield, bestselling author of Love Is A Mixtape, One Song At A Time and Talking to Girls About Duran Duran

"Simon Doonan’s hilarious cultural commentary meets Lou Reed’s poetic rock gravitas. Warhol, Bowie, electroshock, conflict, surprises, sequins— this book is truly a walk on the wild side, with my very favorite humorist as our guide!" — Ariel Levy, Bestselling author of The Rules Do Not Apply and Female Chauvinist Pigs

“Part love letter to an LGBTQ masterpiece, part hilarious memoir, Simon Doonan’s Transformer is a treat, as glamorous, decadent and camp as Lou Reed’s iconic album. The book is at turns funny and affecting, sly and subversive and, as you would expect, splendidly swishy. Superbly entertaining, Simon’s book deftly captures the epoch when glam rock burst into our lives, and, like Transformer itself, acts as a time capsule of that exciting, hedonistic era.” — Darryl W. Bullock, author of The Velvet Mafia and Pride Pop and Politics

“With real humor and insight Simon Doonan beautifully weaves together hilarious and moving snapshots of his youth with the larger context of Lou Reed's most successful album. Here's a fresh, exhilarating view of a key moment in the history of pop music and cultural politics. It's the perfect book to read on a perfect day.”
— Sam Lipsyte, author of No One Left to Come Looking for You and The Ask

“Thank you, Simon, for this guidebook to my misspent youth. I wasted years in wild conjecture about my idols. Conjecture no more! You've dished up the facts -and some of the more irresistible fictions - about Lou and David and the glitter critters of a fabulous long ago.”
— Tim Blanks, Editor At Large, Business of Fashion

Simon Doonan is the author of many books, including Drag: The Complete Story; Keith Haring; How to Be Yourself: Life-Changing Advice from a Reckless Contrarian, and the memoir Beautiful People, which was adapted for television by the BBC. Simon appears as a judge on the hit NBC television show Making It. He lives in Palm Beach, Florida.

Other Works by Simon Doonan