How to Stand Up to a Dictator

The Fight for Our Future 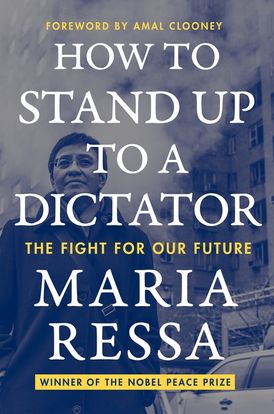 How to Stand Up to a Dictator

The Fight for Our Future

From the recipient of the 2021 Nobel Peace Prize, an impassioned and inspiring memoir of a career spent holding power to account.

Maria Ressa is one of the most renowned international journalists of our time. For decades, she challenged corruption and malfeasance in her native country, the Philippines, on its rocky path from an authoritarian state to a democracy. As a reporter from CNN, she transformed news coverage in her region, which led her in 2012 to create a new and innovative online news organization, Rappler. Harnessing the emerging power of social media, Rappler crowdsourced breaking news, found pivotal sources and tips, harnessed collective action for climate change, and helped increase voter knowledge and participation in elections.

But by their fifth year of existence, Rappler had gone from being lauded for its ideas to being targeted by the new Philippine government, and made Ressa an enemy of her country’s most powerful man: President Duterte. Still, she did not let up, tracking government seeded disinformation networks which spread lies to its own citizens laced with anger and hate. Hounded by the state and its allies using the legal system to silence her, accused of numerous crimes, and charged with cyberlibel for which she was found guilty, Ressa faces years in prison and thousands in fines.

There is another adversary Ressa is battling. How to Stand Up to a Dictator is also the story of how the creep towards authoritarianism, in the Phillipines and around the world, has been aided and abetted by the social media companies. Ressa exposes how they have allowed their platforms to spread a virus of lies that infect each of us, pitting us against one another, igniting, even creating, our fears, anger, and hate, and how this has accelerated the rise of authoritarians and dictators around the world. She maps a network of disinformation—a heinous web of cause and effect—that has netted the globe: from Duterte’s drug wars to America's Capitol Hill; Britain’s Brexit to Russian and Chinese cyber-warfare; Facebook and Silicon Valley to our own clicks and votes.

Democracy is fragile. How to Stand Up to a Dictator is an urgent cry for Western readers to recognize and understand the dangers to our freedoms before it is too late. It is a book for anyone who might take democracy for granted, written by someone who never would. And in telling her dramatic and turbulent and courageous story, Ressa forces readers to ask themselves the same question she and her colleagues ask every day: What are you willing to sacrifice for the truth?

“[Maria's] book takes us on a rare and wonderous hero’s journey that teaches us how to be heroes too. Ressa invites us into her . . . thrilling life story . . . . As she transforms from shy schoolgirl, to Princeton polymath, to pathbreaking journalist and warrior for democracy, the same candor and generosity that define her distinctive courage infuse her storytelling with magical power. We experience Maria Ressa’s becoming, and we become more too—more prepared to embrace fear, paddle against the tide, commit to loving kindness, link arms, challenge the supposedly inevitable, and even stand up to dictators.” — Shoshana Zuboff, author The Age of Surveillance Capitalism, Professor emeritus Harvard Business School

Nobel Peace Prize cowinner Ressa . . . delivers an outstanding memoir-cum-action plan for creating “a vision of the internet that binds us together instead of tearing us apart” . . . . Elegantly written yet stuffed with research data and technical details, this is an essential update on the battle against disinformation. — Publishers Weekly (starred review)

In this impassioned warning and inspirational call to arms, Ressa identifies and illuminates her core values of empathy, honesty, and faith in humanity to illustrate how a strong commitment to such foundational beliefs can provide the key to democracy’s survival. . . . Searing and electrifying. — Booklist (starred review)

Maria Ressa is the co-recipient of the 2021 Nobel Peace Prize for her work defending freedom of expression and democracy. She is CEO, cofounder, and president of Rappler, the Philippines’ top digital news site, and has been a journalist in Asia for over thirty-six years. She was TIME Magazine’s Person of the Year in 2018 and won the UNESCO World Press Freedom Prize in 2021. Among the many other awards she has received are the prestigious Golden Pen of Freedom Award from the World Association of Newspapers and News Publishers, the Knight International Journalism Award from the International Center for Journalists, the Shorenstein Journalism Award from Stanford University, and the Sergei Magnitsky Award for Investigative Journalism. She grew up in the Philippines and the United States and currently lives in Manila.

Other Works by Maria Ressa