Never Give an Inch

Fighting for the America I Love 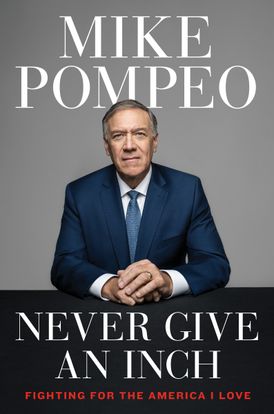 Never Give an Inch

Fighting for the America I Love

Former Secretary of State Mike Pompeo spearheaded the Trump Administration’s most significant foreign policy breakthroughs. Now, he reveals how he did it, and how it could happen again.

As the only four-year national security member of President Trump’s Cabinet, he worked to impose crushing pressure on the Islamic Republic of Iran, avert a nuclear crisis with North Korea, deliver unmatched support for Israel, and bring peace to the Middle East. Drawing on his commitment to America’s founding principles and his Christian faith, his efforts to promote religious freedom around the world were unequaled in American diplomatic history. Most importantly, he led a much-needed generational transformation of America's relationship with China.

Blending remarkable and often humorous stories of his interactions with world leaders and unmatched analysis of geopolitics, Never Give an Inch tells of how Pompeo helped the Trump Administration craft the America First approach that upended Washington's wisdom—and made him America’s enemies’ worst nightmare. It is a raw account of what it took to deliver winning outcomes, including answers to questions like:

--Who still has him high on their list of enemies

A road map of the trends and players shaping the world today, Never Give an Inch is more than a historical review of the Trump Administration's greatest victories. It is essential reading for anyone who wants to understand the challenges of the future. And it is an inspirational story of leadership through dangerous times that will leave you with a greater appreciation for America.

“Mike is a real-life Tom Clancy American hero, and our nation is better for his service. The world is changing, and this book tells the story.” — Marc Andreessen, cofounder of Andreessen Horowitz

“Our family is forever grateful for experiencing the brave work of Secretary Pompeo, defending faith and freedom for all Americans and those in every nation, no matter their beliefs. Secretary Pompeo rose above disparagement and danger to protect us all, making history as the only person to lead the CIA and the State Department.” — Kathy Ireland, chair/CEO of Kathy Ireland Worldwide

“An American patriot and a truly gifted leader, Mike led the Agency through one of the most important and challenging periods in American history. His unparalleled ability to build and lead teams in a highly successful fashion through complex strategic challenges was extraordinary. Mike’s actions were always focused on achieving the absolute best results for the American people.” — Tom Higgins, retired officer, Central Intelligence Agency

“Having served as a fellow Army officer with Mike in the Second Armored Cavalry, I spent many a cold, wet, and sleepless night with Mike on ‘Freedom's Frontier.’ There are two things you always knew about Mike: His dedication to duty and to the mission was paramount, and his loyalty to his soldiers and fellow officers was unquestionable. This book is an important read for all Americans.” — Jeff Boobar, former Army officer and retired DEA special agent

“Weakness invites aggression. No one appreciates this dictum better than Secretary Mike Pompeo, a patriot and a pipehitter. Never Give an Inch is Mr. Pompeo’s account of the state of America and the adversaries we face. It is a fascinating read, sensational and at times terrifying. I couldn’t put it down. If you care about America’s place in an era of seemingly endless crises, I urge you to pick up this book.” — Ayaan Hirsi Ali, research fellow, Hoover Institution, Stanford University

“Secretary Pompeo’s effort on behalf of religious freedom for people of all faiths from across the world increased hope for many.” — Timothy Cardinal Dolan, Archbishop of New York

“A true tour de force that reads like a thriller, densely packed with important content. Written with real humor, the messages, while often alarming, are delivered in a uniquely positive way. Shining through on every page is the author’s deep love of country and dedication to the principles enshrined in our founding documents. This riveting memoir is the most compelling summary to be found anywhere of the challenges currently facing the United States in today’s increasingly dangerous world.” — Mary Ann Glendon, professor emerita of law at Harvard University and former US ambassador to the Holy See

Michael R. Pompeo served as the 70th Secretary of State of the United States of America and as the Director of the Central Intelligence Agency during the Trump Administration. A native of Southern California, Mike graduated first in his class from the United States Military Academy at West Point in 1986. He served as a cavalry officer in the U.S. Army before graduating from Harvard Law School. From 2011-2017, he represented the Fourth District of Kansas in the U.S. House of Representatives. Mike and his wife Susan are proud parents of their son Nick and in-laws to his lovely wife Rachael, each of whom they consider to be the greatest blessings of their lives. He is currently a distinguished fellow at Hudson Institute.

Other Works by Mike Pompeo