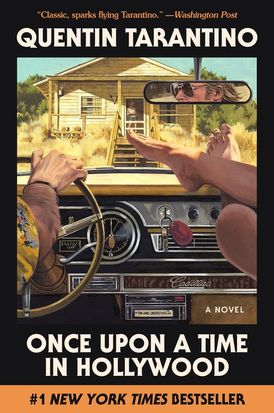 Quentin Tarantino’s debut work of fiction is an audacious, hilarious, disturbing novel about life in the movie colony, circa 1969. Here is Hollywood, both the fairy tale and the real thing, as given to us by a master storyteller who knows it like the back of his hand. This new edition includes a foreword by Walter Kirn.

RICK DALTON—Once he had his own TV series, but now Rick’s a washed-up villain-of-the week drowning his sorrows in whiskey sours. Will a phone call from Rome save his fate or seal it?

CLIFF BOOTH—Rick’s stunt double, and the most infamous man on any movie set because he’s the only one there who might have got away with murder. . . .

SHARON TATE—She left Texas to chase a movie-star dream, and found it. Sharon’s salad days are now spent on Cielo Drive, high in the Hollywood Hills.

CHARLES MANSON—The ex-con’s got a bunch of zonked-out hippies thinking he’s their spiritual leader, but he’d trade it all to be a rock ‘n’ roll star.

These indelible characters—and many more: an acting child prodigy beaming with hope; a booze-drenched former A-lister who’s lost it all—occupy a vanished world from not so long ago that is brought to brilliant life in these pages. As the New York Times raves, “Tarantino’s first novel is, to borrow a phrase from his oeuvre, a tasty beverage. . . . [He] makes telling a page-turning story look easy, which is the hardest trick of all.”