75 Years After Its Creation, Has Israel Fulfilled Its Founders' Dreams? 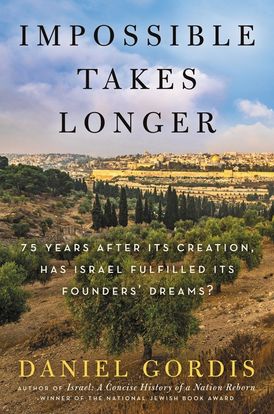 75 Years After Its Creation, Has Israel Fulfilled Its Founders' Dreams?

On Israel's seventy-fifth anniversary comes a nuanced examination of the country's past, present, and future, from the two-time National Jewish Book Award–winning author of Israel.

In 1948, Israel’s founders had much more in mind than the creation of a state. They sought not mere sovereignty but also a “national home for the Jewish people,” where Jewish life would be transformed. Did they succeed? The state they made, says Daniel Gordis, is a place of extraordinary success and maddening disappointment, a story of both unprecedented human triumph and great suffering.

Now, as the country marks its seventy-fifth anniversary, Gordis asks: Has Israel fulfilled the dreams of its founders? Using Israel's Declaration of Independence as his measure, Gordis provides a thorough, balanced perspective on how the Israel of today exceeds the country’s original aspirations and how it has fallen short. He discusses the often-overlooked reasons for the establishment of the State of Israel; the flourishing of Jewish and Israeli culture; the nation's economy and its transformative tech sector; the Israeli-Arab conflict; the distinct form of Judaism that has emerged in the Jewish state; the nation's complex relationship with the Diaspora; and much more.

Offering new angles of thinking about Israel, Gordis brings moderation and clarity to the prevailing discourse. And through weighing Israel’s successes, critiquing its failures, and acknowledging its inherent contradictions, he ultimately suggests that the Jewish state is a success far beyond anything its founders could have imagined.

“In Impossible Takes Longer, Daniel Gordis has done the seemingly impossible by writing yet another seminal work on the State of Israel. With a penetrating view of the past, Gordis analyzes Israel’s success—and sometimes lack of it—in achieving its founding goals. For all who care about Israel, its history and its future, this book is essential.” — Michael Oren, former Israeli ambassador to the United States, member of the Knesset, and New York Times bestselling historian

“At a particularly difficult moment for Israel, Daniel Gordis has given us an essential reminder about why Israel still matters. Writing with nuance, sensitivity, and, above all, love, Gordis confronts the toughest issues and shows us why hope remains the most realistic assessment of Israel’s future.” — Yossi Klein Halevi, senior fellow at the Shalom Hartman Institute and author of the New York Times bestseller Letters to My Palestinian Neighbor

“This important book—critical at times but optimistic throughout—should be read by everyone who admires Israel’s accomplishments yet is concerned about its future. Impossible Takes Longer addresses many of the questions you already have about Israel but, even more important, points to the questions we all need to begin asking.” — Natan Sharansky, former political prisoner in the Soviet Union, former minister for Diaspora Affairs in Israel, and author of Never Alone

“Daniel Gordis’s valuable book uses Israel’s Declaration of Independence to measure the nation’s successes and failures. Gordis reminds us of the audacity of the vision and the depth of the revolution that is Zionism. Impossible Takes Longer reminds us how not inevitable Zionism’s success has been and that, with all its flaws, Israel exemplifies what success looks like.” — Einat Wilf, former member of the Knesset for the Labor Party and author of We Should All Be Zionists and The War of Return

“One might think that it would be hard for another book about Israel to provide new and meaningful insights about the Jewish state. Yet Impossible Takes Longer does precisely that. This is a thoughtful, fair, and insightful look at a remarkable country. With so much distortion about Israel coming from those who seek to delegitimize it, Gordis’s perspective has never been more important than it is today.” — Ambassador Dennis Ross, Middle East envoy under Presidents George H. W. Bush and Bill Clinton and author of The Missing Peace

“Among all the nations of the world, Israel is uniquely and routinely singled out for unfair criticism. Daniel Gordis does the unusual and remarkable job of examining Israeli history in a thoughtful way. While he gives voice to criticisms that not all may agree with, he also presents Israel’s incredible accomplishments in a way that will inform any fair-minded reader.” — Nikki R. Haley, governor of South Carolina (2011 to 2017) and US ambassador to the United Nations (2017 to 2019)

"An accessible overview of Israeli history and a well-reasoned case for why it’s worth supporting." — Publishers Weekly

Daniel Gordis is the Koret Distinguished Fellow at Shalem College—Israel’s first liberal arts college—which he helped found in 2007. The author of numerous books on Jewish thought and political currents in Israel, he has twice won the National Jewish Book Award, including the prize for Book of the Year for Israel: A Concise History of a Nation Reborn. Raised and educated in the United States, he has been living in Jerusalem since 1998.