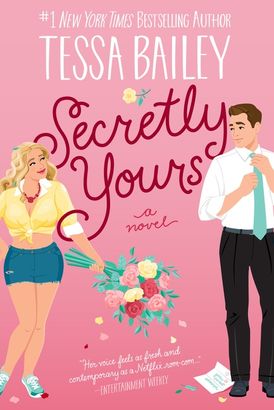 From #1 New York Times bestselling author and TikTok favorite Tessa Bailey comes a steamy new rom-com about a starchy professor and the bubbly neighbor he clashes with at every turn...

Hallie Welch fell hard for Julian Vos at fourteen, after they almost kissed in the dark vineyards of his family’s winery. Now the prodigal hottie has returned to their small Napa town. When Hallie is hired to revamp the gardens on the Vos estate, she wonders if she’ll finally get that smooch. But the grumpy professor isn’t the teenager she remembers and their polar opposite personalities clash spectacularly. One wine-fueled girls’ night later, Hallie can’t shake the sense that she did something reckless—and then she remembers the drunken secret admirer letter she left for Julian. Oh shit.

On sabbatical from his ivy league job, Julian plans to write a novel. But having Hallie gardening right outside his window is the ultimate distraction. She’s eccentric, chronically late, often literally covered in dirt—and so unbelievably beautiful, he can’t focus on anything else. Until he finds an anonymous letter sent by a woman from his past. Even as Julian wonders about this admirer, he’s sucked further into Hallie’s orbit. Like the flowers she plants all over town, Hallie is a burst of color in Julian’s grey-scale life. For a man who irons his socks and runs on tight schedules, her sunny chaotic energy makes zero sense. But there’s something so familiar about her... and her very presence is turning his world upside down.

"This sexy opposites-attract romantic comedy features witty banter, steamy dialogue, and well-developed characters... Readers will devour Bailey’s latest (after Hook, Line, and Sinker) in one sitting, then go back to again and again to pick up on its intricate subtleties. Highly recommended." — Library Journal (starred review)

"A haughty professor and a spirited gardener face off in this raunchy and enchanting rom-com from bestseller Bailey... The witty banter and gripping tension will make this a treat for the author’s many fans." — Publishers Weekly

“Tessa disarms you with a laugh, heats things up past boiling, and then puts a squeeze inside your heart. The tenderness, vulnerability and heat I am always guaranteed with a Tessa Bailey book are the reasons she is one of my all-time favorite authors.”  — Sally Thorne

“Her voice feels as fresh and contemporary as a Netflix rom-com...  Bailey writes banter and rom-com scenarios with aplomb, but for those who like their romance on the spicier side, she’s also the Michelangelo of dirty talk. She wields filth like Da Vinci does a paintbrush, and there’s a lot to be said for an author who can fill such exchanges with all the requisite heat, enthusiastic consent, and yes, even humor, of such a scenario without veering into corny territory.” — Entertainment Weekly

“With her singular talent for writing romantic chemistry that is both sparkling sweet and explosively sexy, Tessa Bailey once again delivers... one of the genre’s very best.” — Kate Clayborn

“Bailey is a master at articulating emotion through both narrative prose and dialogue... Every page in this fabulous novel is pure romance gold.” — BookPage (Starred Review) on Hook, Line, and Sinker

“Bailey strikes rom-com gold in this outstanding tale... [She] is bound to earn new followers with love scenes hot enough to boil water and a hilariously naïve Schitt’s Creek-inspired protagonist who is clearly out of her depth.”  — Booklist (starred review) on It Happened One Summer

“A romantic comedy delight... It Happened One Summer will be your absolute jam.” — Christina Lauren

#1 New York Times Bestselling author Tessa Bailey can solve all problems except for her own, so she focuses those efforts on stubborn, fictional blue collar men and loyal, lovable heroines. She lives on Long Island avoiding the sun and social interactions, then wonders why no one has called. Dubbed the “Michelangelo of dirty talk,” by Entertainment Weekly, Tessa writes with spice, spirit, swoon and a guaranteed happily ever after. Catch her on TikTok at @authortessabailey or check out tessabailey.com for a complete list of books.

Other Works by Tessa Bailey

Love Her or Lose Her