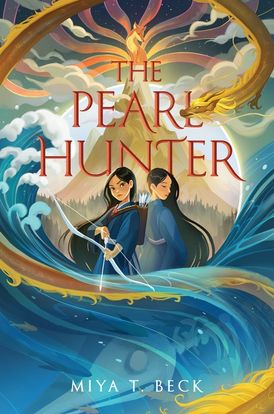 Set in a world inspired by pre-Shogun era Japan, this is a stunning debut fantasy in the vein of Grace Lin about how a young pearl diver goes to the ends of the earth to rescue her twin sister, who has been stolen by a ghost whale.

Kai and Kishi share the same futon, the same face, and the same talent for pearl diving. But Kishi is the obedient daughter, while Kai tries to push the rules, and sometimes they fight. Still, when Kishi is stolen and killed by the legendary Ghost Whale, nothing will stop Kai from searching for her, deep in the ocean, hoping for a way to bring her back to life.

But such a rescue is beyond the power of an ordinary mortal. Kai strikes a deal with the gods: she’ll steal a magic pearl in exchange for her sister’s soul. As she journeys across treacherous land scape, Kai must navigate encounters with scheming bandits, a power-hungry war lord, and a legion of conniving fox spirits.  And when a new friendship becomes something almost as powerful as her love for her sister, Kai must make impossible choices and risk everything just to get home again.

Woven through with Japanese culture and legends, this many-layered story will grip readers of all ages.

"Filled with elements of Japanese culture, including myths and legends, this is an exciting, fast-paced adventure with lots of twists and turns…. Readers will want to dive into this story full of magic and adventure." — Kirkus Reviews

"The elegant prose is descriptive, and the fictional world, inspired by eleventh century Japan, is rich with Japanese myths and legends... the book will especially find an audience with fans of Erin Entrada Kelly and Grace Lin." — Bulletin of the Center for Children’s Books

"The engrossing story whisks readers into a world of magical possibilities along with real-world conundrums. Enchanting Japanese folklore and detailed settings are woven into a high-stakes adventure with a twist ending that will leave readers hoping for more. A terrifically transporting tale of familial love and the power in finally stepping into your identity." — Booklist

Miya T. Beck is a native Californian who always had a deep interest in the Japanese side of her heritage. Though she tried and failed to become fluent in Japanese, her studies did introduce her to the myths and fairy tales that inspired her novel, The Pearl Hunter. A former daily newspaper reporter and magazine writer, she lives in Brooklyn with her family.

Other Works by Miya T. Beck