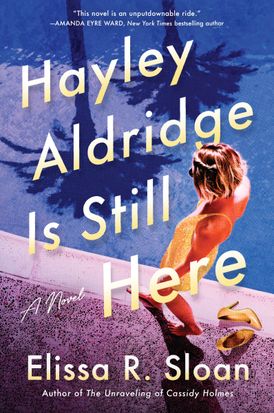 From the author of The Unraveling of Cassidy Holmes comes yet another sharp, page-turning novel about a forgotten child star and former Hollywood “It” Girl who is now fighting back against the conservatorship that has controlled her life for the past decade.

It’s been years since anyone really thought about Hayley Aldridge. A child star turned television royalty, Hayley spent years in Hollywood partying and being plastered across the front page of all the tabloids before quietly disappearing after a whirlwind marriage and divorce and very public breakdown. Once the tabloids wrung every last drop out of the drama, they moved on to the next It Girl. But Hayley is still here.

For over a decade, she’s been trapped in a conservatorship and had every aspect of her life controlled by her parents. She goes nowhere, does nothing without their approval, which is rarely granted. Her visits with her kids are monitored, her fan mail is censored, and she’s a prisoner in her own home. She thought things might change once she was well enough to work, but the restrictions got even tighter as she continued to bring money in—the only thing her parents ever really cared about. Hayley is beginning to realize that this nightmare is her actual life. And she’s sick of it.

When the hashtag #helphayley starts to emerge on social media, and the public starts thinking critically about what happened to her all those years ago, there’s finally some momentum on her side. With an upcoming court date to review the status of the conservatorship, Hayley might finally have a chance to break free.

But how can she go up against her parents when they’re aware of her every move? It’s time for Hayley Aldridge to remind the world who she is, this time on her own terms.

"Heart-wrenching and riveting, Hayley Aldridge Is Still Here is both a sensitive portrait of a young woman trying to take back control of her own life and an acute skewering of a toxic culture that still very much exists. Like watching a celebrity implode in front of your own eyes, I found it near impossible to look away." — Ella Berman, author of The Comeback

"Grab your bucket hat. Queue up your favorite 90s boy band album. Then prepare to lose yourself in this thoughtful, page-turning exploration of how the world treats young women in the spotlight, and what happens when they finally decide to fight back." — Laura Hankin, author of Happy & You Know It and A Special Place for Women

"Paparazzi, drugs, affairs, eating disorders, and family betrayal set the scene for fast-paced drama. In the wake of Britney buzz, this novel will grab anyone wondering how a female celebrity poised to have it all could be robbed, not just of her dignity, but her most basic freedoms." — Alena Dillon, author of Mercy House

"Everyone knows Hayley Aldridge’s name, but no one knows who she really is. Sharp and sparkling, Elissa R. Sloan’s tale of a famous wild child turned commodity is filled with high stakes, shocking twists, and pitch-perfect explorations of celebrity and exploitation. If you’ve ever wondered the truth behind tabloid headlines, you need to read this irresistible and empowering story of a woman reclaiming her own life." — Sarah Priscus, author of Groupies

"Sloan’s novel is a page-turner that speaks to our current reflections on, and past treatments of, celebrities." — Bust Magazine

"Spirited...Sloan does a great job portraying Hayley’s grasping, opportunistic parents, and the twisty plot never lets up. Readers will devour this." — Publishers Weekly

"Sloan’s fascinating examination of late-nineties and early-aughts celebrity culture feels equally authentic and terrifying...Hayley Aldridge Is Still Here does make an effective argument that audiences should be more thoughtful about the kinds of media they consume." — Booklist

“This is a perfect, unputdownable book for fans of celebrity gossip and pop-culture fiction.” — Library Journal

“The Unraveling of Cassidy Holmes is a page-turning peek inside the glamour and brutality of life as a pop star. Sloan takes us on a wild ride through the world of music video shoots, expensive hotels, and arena tours—showing us the darkness that threatens just below the surface.” — Taylor Jenkins Reid, New York Times bestselling author of Daisy Jones and The Six

“I didn't know I was waiting for a smart, literary writer to craft a novel about the rise and fall of a teen star akin to Britney Spears until I discovered The Unraveling of Cassidy Holmes... A witty, bright, hilarious—and at times devastating—read... I loved it." — Amanda Eyre Ward, New York Times bestselling author of The Jetsetters

“A witty, devastating and ultimately beautiful peek behind the illusion of fame...With a perfect combination of music, drama and depth, The Unraveling of Cassidy Holmes takes us on a journey I won’t soon forget. From the opening line to the stunning close, this is a mesmerizing, thrilling and must-read debut.” — Patti Callahan, New York Times bestselling author of Becoming Mrs. Lewis

"In The Unraveling of Cassidy Holmes, Elissa R. Sloan ponders the dark side of fame with the fictional tale of Cassidy Holmes...Think of it as 13 Reasons Why meets Daisy Jones & The Six—a mediation on fame, friendships, depression—and it will keep you turning until the last page." — Teen Vogue

"Readers looking to take a walk on the wild side should pick up Elissa R. Sloan’s debut for an exhilarating tale about the dark side of celebrity." — Harper’s Bazaar

"Get ready for a whirlwind of 90s pop nostalgia." — Parade

"If you loved Taylor Jenkins Reid's Daisy Jones and the Six and know every lyric to a Britney Spears song, this one is definitely for you." — E! Online

"Fans of Daisy Jones and the Six shouldn't miss out on The Unraveling of Cassidy Holmes by Elissa R. Sloan." — Popsugar

Elissa R. Sloan is a Texas-native Japanese-American with a penchant for reading books and celebrity gossip. She lives in Austin with her husband and two cats in a house with a rolling library ladder. The Unraveling of Cassidy Holmes is her debut novel.

Other Works by Elissa R. Sloan

The Unraveling of Cassidy Holmes