Poirot Investigates & Murder in the Mews 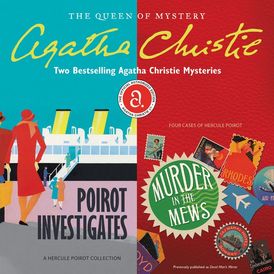 Poirot Investigates & Murder in the Mews

Poirot Investigates a host of murders most foul—as well as other dastardly crimes—in this intriguing collection of short stories from the one-and-only Agatha Christie.

What links these fascinating cases? Only the brilliant deductive powers of Hercule Poirot!

Murder in the Mews

How did a woman holding a pistol in her right hand manage to shoot herself in the left temple? What was the link between a ghost sighting and the disappearance of top secret military plans? How did the bullet that killed Sir Gervase shatter a mirror in another part of the room? And should the beautiful Valentine Chantry flee for her life from the holiday island of Rhodes?

Hercule Poirot is faced with four mystifying cases—each a miniature classic of characterization, incident, and suspense.