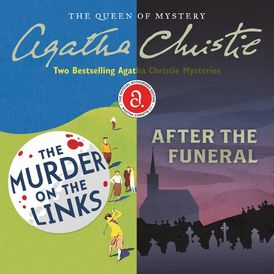 Murder on the Links

In Agatha Christie’s class mystery Murder on the Links, Hercule Poirot attempts to unravel the grisly conundrum of not one, but two dead bodies discovered on a French golf course.

An urgent cry for help brings Hercule Poirot to France. But he arrives too late to save his client, whose brutally stabbed body now lies face down in a shallow grave on a golf course.

But why is the dead man wearing an overcoat that is too big for him? And for whom was the impassioned love letter in the pocket? Before Poirot can answer these questions, the case is turned upside down by the discovery of a second, identically murdered corpse.…

?Hercule Poirot is called on to investigate the murder of a brother and sister, in this classic Agatha Christie mystery now available in an updated edition with a foreword Sophie Hannah.

When Cora Lansquenet is savagely murdered, the extraordinary remark she had made the previous day at her brother Richard’s funeral suddenly takes on a chilling significance. At the reading of Richard’s will, Cora was clearly heard to say, “It’s been hushed up very nicely, hasn’t it. But he was murdered, wasn’t he?”

Did Cora’s accusation a dark truth that sealed her own fate? Or are the siblings’ deaths just tragic coincidences?

Desperate to know the truth, the Lansquenet’s solicitor turns to Hercule Poirot to unravel the mystery. For even after the funeral, death isn’t finished yet . . .