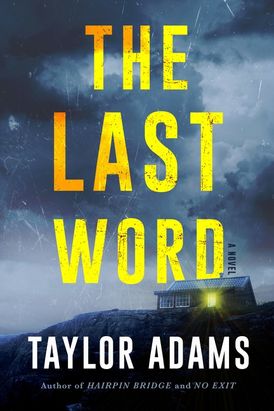 After posting a negative book review, a woman living in a remote location begins to wonder if the author is a little touchy—or very, very dangerous—in this pulse-pounding novel of psychological suspense and terror from the critically acclaimed author of No Exit and Hairpin Bridge.

Emma Carpenter lives in isolation with her golden retriever Laika, house-sitting an old beachfront home on the rainy Washington coast. Her only human contact is her enigmatic old neighbor, Deek, and (via text) the house’s owner, Jules.

One day, she reads a poorly written—but gruesome—horror novel by the author H. G. Kane, and posts a one-star review that drags her into an online argument with none other than the author himself. Soon after, disturbing incidents start to occur at night. To Emma, this can’t just be a coincidence. It was strange enough for this author to bicker with her online about a lousy review; could he be stalking her, too?

As Emma digs into Kane’s life and work, she learns he has published sixteen other novels, all similarly sadistic tales of stalking and murder. But who is he? How did he find her? And what else is he capable of?

“Moves at about 150 miles per hour. . . . A novel that’s part action flick and part affecting rumination on moral responsibility within families.” — Washington Post on Hairpin Bridge

“Hairpin Bridge reads like a Stephen King novel and is especially reminiscent of Misery in how the characters shape-shift as the narrative progresses, leaving the reader wondering who is more dangerous—and more importantly, which one will prevail.” — BookPage

“The carefully layered drawing-room psychology of Agatha Christie cross-pollinated with the pure squishy terror of Stephen King. . . . [Taylor Adams] nails his setup and builds some truly distinctive characters.”  — Entertainment Weekly on No Exit

“There’s a cinematic propulsion to No Exit that commands the reader’s attention, and Mr. Adams times his shocks with a sure hand.”  — Wall Street Journal

“What a box of tricks! This full-throttle thriller, dark and driving, rivals Agatha Christie for sheer ingenuity and James Patterson for flat-out speed. Swift, sharp, and relentless.” — A. J. Finn, #1 New York Times bestselling author of The Woman in the Window, on No Exit

"A shot of adrenaline straight to the heart! Propulsive and unpredictable, Hairpin Bridge will have you on edge from the first page to the last." — Riley Sager, New York Times bestselling author of Home Before Dark on HAIRPIN BRIDGE

Taylor Adams is the author of several acclaimed thrillers including Hairpin Bridge and No Exit. No Exit has been published in 32 languages and was recently released as a Hulu Original film. Adams lives in Washington State.