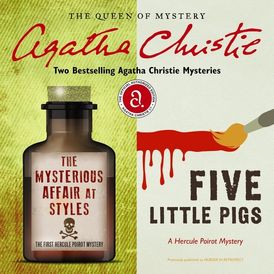 Hercule Poirot solves his first case in the Agatha Christie novel that started it all, now in a fully restored edition that features a “missing chapter” along with commentary from Christie expert John Curran.

Who poisoned the wealthy Emily Inglethorp and how did the murderer penetrate and escape from her locked bedroom? Suspects abound in the quaint village of Styles St. Mary—from the heiress's fawning new husband to her two stepsons, her volatile housekeeper, and a pretty nurse who works in a hospital dispensary.

With impeccable timing, and making his unforgettable debut, the brilliant Belgian detective Hercule Poirot is on the case.

In Agatha Christie’s classic, Five Little Pigs, beloved detective Hercule Poirot races to solve a case from out of the past.

Beautiful Caroline Crale was convicted of poisoning her husband, but just like the nursery rhyme, there were five other “little pigs” who could have done it: Philip Blake (the stockbroker), who went to market; Meredith Blake (the amateur herbalist), who stayed at home; Elsa Greer (the three-time divorcée), who had her roast beef; Cecilia Williams (the devoted governess), who had none; and Angela Warren (the disfigured sister), who cried all the way home.

Sixteen years later, Caroline’s daughter is determined to prove her mother’s innocence, and Poirot just can’t get that nursery rhyme out of his mind.