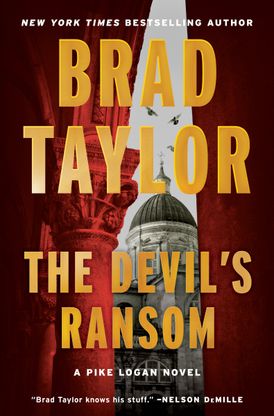 Conducting a routine cover development trip to Tajikistan, Pike and Jennifer learn that Afghanistan has fallen, and there’s a man on the run. One that has done more for the United States in Afghanistan than anyone else. Pulled in to extract him, Pike collides headlong into a broader mystery: His covert company, along with every other entity in the Taskforce, has been hit with a ransomware attack, and there’s some connection between the Taliban and the hack. Given the order to track down the perpetrators, he has no idea that the problem set is much, much larger and more dangerous than a simple attack on his organization. That hack was just a test-run, and the real one is coming soon, engendered by a former NSA specialist in the U.S. government.

A man who wants to return to the bipolar world of the Cold War, the turncoat has cloaked his attack behind hackers from Serbia and Russia, and if successful, his target will alter the balance of power on the global stage. So far, the specialist has remained one step ahead of the Taskforce, but he has just made one massive mistake: hitting Pike Logan.

“Taylor has fashioned a wondrously structured tale that’s complex without being confounding. Once deemed the heir apparent to W.E.B. Griffin, Taylor is now laying claim to being the American John le Carre, and his End of Days is a stunning triumph.”  — Providence Journal

“Pike Logan returns with a thundering force… Taylor’s own military experience and insights bleed onto the page, but in an honest and informative way that makes his story seem a little too real for comfort… Taylor [is] one of today’s finest storytellers.” — TheRealBookSpy.com on End of Days

"American Traitor is frighteningly realistic and will cause a lot of sleepless nights in Washington. Brad Taylor is the best action writer in the business today, and Pike Logan is the right hero for our time."  — William H. McRaven, Adm, U.S. Navy (Ret.) and author of Make Your Bed

“Taylor, a retired Special Forces lieutenant colonel, has a good grasp of the geopolitical backdrop of his stories, and this knowledge gives his books a solid layer of plausibility. The high-energy writing also helps sell the story and characters. This is a series that has earned its popularity.” — Booklist on American Traitor

“It is [Taylor’s] remarkable character work with a robust and memorable cast that is the true strength of the novel. The camaraderie of the battle-hardened operators…, their staunch loyalty... and their stalwart sense of shared duty ultimately make for a big-hearted novel, even amid its many pulse-pounding moments.” — Charleston Post & Courier on American Traitor

“[A] page-turning thriller...Taylor is one of today’s premiere authors writing about the world of special ops.” — Associated Press on American Traitor

“Taut . . . a memorable cast, powerful action scenes, and authentic tradecraft . . . Series fans will appreciate the continuing evolution of the characters and the customary attention to tactical detail. Taylor reinforces his place as a major player in the military action genre.” — Publishers Weekly on American Traitor

“Brad Taylor knows his stuff. His new Pike Logan novel, Hunter Killer, has the gun metal ring of authenticity and the crisp writing of a military communique… It makes you pause and think while you’re being thoroughly and rapidly entertained. It’s an excellent read, and I greatly enjoyed it.” — Nelson DeMille

“Taylor continues to tell flawless stories with his stellar cast of characters... It’s amazing that after so many novels Taylor can still maintain the high-level quality and breathless action readers expect, while also getting better with each tale.” — Booklist (starred review) on Hunter Killer

"Taylor brings an unquestionable level of authenticity to his Pike Logan series... Throw in some former Israeli Mossad agents and the cast of elite operators along with the level of bone-crushing violence is almost overflowing. A surefire hit for those who like contemporary foreign affairs spiced heavily with page-turning action." — Kirkus Reviews on Hunter Killer