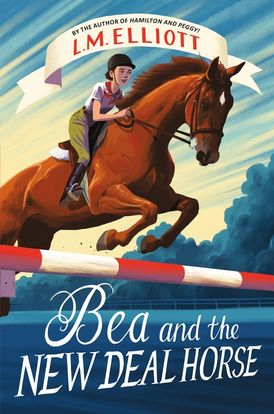 This lyrical middle grade historical novel set during the Great Depression from award-winning author L. M. Elliott is a moving tale of the spirit of American persistence, found family, and the magical partnership between girl and horse.

Bea wakes to Daddy’s note in a hayloft, where he abandoned her with her little sister after the stock market crash took everything: Daddy’s job at the bank, their home, Mama’s health and life.

How is Bea supposed to convince the imposing Mrs. Scott to take in two stray children? Mrs. Scott’s money and Virginia farm are drying up in a drought and the Great Depression, too. She might have to sell her beautiful horses, starting with a dangerous chestnut that has caused tragedy in the past and injures her stableman shortly after Bea arrives.

But wrestling with her own hurts and fears, Bea understands the chestnut’s skittish distrust. She sees hope in the powerful jumper—if he can compete at horse shows, they might save the farm, and maybe Bea can even win a place in Mrs. Scott’s heart.

PRAISE FOR LOUISA JUNE AND THE NAZIS IN THE WAVES: "Evocatively threaded with the scents and sounds of Tidewater Virginia coastal communities, this story presents a fascinating, lesser-known aspect of the war told from a young girl’s perspective. Successfully tackling the devastation of depression on family relationships, the bitter cost of war, and the uplifting strength of no-nonsense friendship, this story has impressive depth. Superb."  — Kirkus Reviews (starred review)

PRAISE FOR HAMILTON & PEGGY: “Elliott combines a flair for fiction with masterly research...the ‘stubborn, defiant, willful’ Peggy will win their hearts as she forges on to take her place alongside her older sisters.”  — Publishers Weekly

“Elliott has written an engaging novel...[and] successfully navigates the challenge of maintaining historical accuracy while upholding the personalities popularized by the musical. [Peggy] is showcased as a strong protagonist who is confident in the best possible ways. Her memorable story will keep readers interested from start to finish.”  — Booklist

“Set during the American Revolution, the tale offers the adventure of war, the family dynamic of sisterhood, and the drama of young love. While Elliott was inspired by Lin-Manuel Miranda’s musical Hamilton, her story is based on independent research, and her afterword is as readable as the novel itself.”  — Kirkus Reviews