More Than 130 Scrumptious and Nourishing Recipes Without Gluten, Dairy, or Processed Sugar0 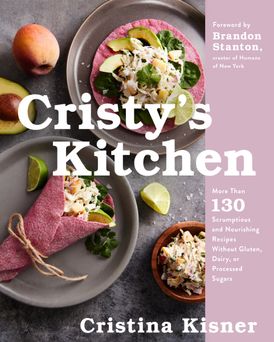 More Than 130 Scrumptious and Nourishing Recipes Without Gluten, Dairy, or Processed Sugar0

A charming and inspirational cookbook featuring healthy gluten-free and dairy-free recipes, from Cristina Kisner, owner of Cristy’s Kitchen and subject of a celebrated viral series on Humans of New York.

In 2019 Cristy Kisner, her husband, Sebastian, and their five daughters moved to Roswell, Georgia, from Peru, investing all their savings in Cristy’s dream of opening a healthy café in the United States. When the Covid-19 lockdown came, they never closed their doors, working sixteen-hour days for a year. In March 2021, Brandon Stanton, the creator of Humans of New York who lived nearby, fell in love with the food at the café and Cristy’s incredible story. He offered to write about her and sponsor a fundraiser. The post went viral and raised $1.2 million in donations in just a week, allowing the family to stay afloat and continue to live their American dream.

The food at Cristy’s Kitchen is gluten free, dairy free, organic, nourishing, and thoroughly tasty. Back in Peru, Cristy had developed her recipes after two of her daughters experienced medical issues ranging from allergic rhinitis to digestive problems to an autoimmune disease. They switched to organic ingredients; removed dairy, gluten, and processed foods from their diets; and got each diagnosis under control. Her daughters’ special packed lunches gained the attention of other parents and Cristy started teaching classes on healthy food prep, which evolved into her dream of having her own restaurant.

That dream has now expanded into sharing her recipes in a cookbook, including:

Packed full of food that is delicious, incredibly healthy, and full of love, Cristy’s cookbook is a way for everyone to bring Cristy’s Kitchen into their home.

Other Works by Cristina Kisner