Reggie and Delilah's Year of Falling 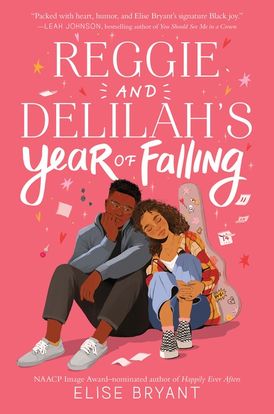 Reggie and Delilah's Year of Falling

From the NAACP Image Award–nominated author of Happily Ever Afters comes a dual POV rom-com about Reggie and Delilah, who fall in love through missed connections and chance meetings on holidays over the course of a year. Perfect for fans of Nicola Yoon and Jenny Han, with crossover appeal for readers of Jasmine Guillory and Talia Hibbert romances.

Delilah always keeps her messy, gooey insides hidden behind a wall of shrugs and yeah, whatevers. She goes with the flow—which is how she ends up singing in her friends’ punk band as a favor, even though she’d prefer to hide at the merch table.

Reggie is a D&D Dungeon Master and self-declared Blerd. He spends his free time leading quests and writing essays critiquing the game under a pseudonym, keeping it all under wraps from his disapproving family.

These two, who have practically nothing in common, meet for the first time on New Year’s Eve. And then again on Valentine’s Day. And then again on St. Patrick’s Day. It’s almost like the universe is pushing them together for a reason.

Delilah wishes she were more like Reggie—open about what she likes and who she is, even if it’s not cool. Except . . . it’s all a front. Reggie is just role-playing someone confident. The kind of guy who could be with a girl like Delilah.

As their holiday meetings continue, the two begin to fall for each other. But what happens once they realize they’ve each fallen for a version of the other that doesn’t really exist?

"Bryant has truly mastered her medium, delivering powerful lessons for characters and readers alike in the form of a delicious, cozy, joyful romance to usher in the new year." — Bulletin of the Center for Children’s Books (starred review)

“An irresistible love song dedicated to hope, joy, overcoming fears, and trusting your voice, Reggie and Delilah’s Year of Falling is unapologetically swoony and refreshingly honest. Another exceptional addition to the Elise Bryant collection and every reader’s shelf.” — Julian Winters, award-winning author of Running With Lions and Right Where I Left You

Elise Bryant was born and raised in Southern California. For many years, Elise had the joy of working as a special education teacher, and now she spends her days writing swoony love stories and eating dessert. She lives with her husband and two daughters in Long Beach. Happily Ever Afters is her debut novel. You can visit her online at www.elisebryant.com.

Other Works by Elise Bryant