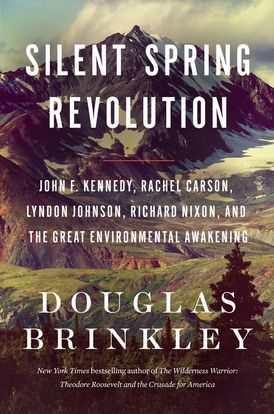 New York Times bestselling author and acclaimed presidential historian Douglas Brinkley chronicles the rise of environmental activism during the Long Sixties (1960-1973), telling the story of an indomitable generation that saved the natural world under the leadership of John F. Kennedy, Lyndon Johnson, and Richard Nixon.

With the detonation of the Trinity explosion in the New Mexico desert in 1945, the United States took control of Earth’s destiny for the first time. After the Truman administration dropped atomic bombs on Japan to end World War II, a grim new epoch had arrived. During the early Cold War years, the federal government routinely detonated nuclear devices in the Nevada desert and the Marshall Islands. Not only was nuclear fallout a public health menace, but entire ecosystems were contaminated with radioactive materials. During the 1950s, an unprecedented postwar economic boom took hold, with America becoming the world’s leading hyperindustrial and military giant. But with this historic prosperity came a heavy cost: oceans began to die, wilderness vanished, the insecticide DDT poisoned ecosystems, wildlife perished, and chronic smog blighted major cities.

In Silent Spring Revolution, Douglas Brinkley pays tribute to those who combated the mauling of the natural world in the Long Sixties: Rachel Carson (a marine biologist and author), David Brower (director of the Sierra Club), Barry Commoner (an environmental justice advocate), Coretta Scott King (an antinuclear activist), Stewart Udall (the secretary of the interior), William O. Douglas (Supreme Court justice), Cesar Chavez (a labor organizer), and other crusaders are profiled with verve and insight.

Carson’s book Silent Spring, published in 1962, depicted how detrimental DDT was to living creatures. The exposé launched an ecological revolution that inspired such landmark legislation as the Wilderness Act (1964), the Clean Air Acts (1963 and 1970), and the Endangered Species Acts (1966, 1969, and 1973). In intimate detail, Brinkley extrapolates on such epic events as the Donora (Pennsylvania) smog incident, JFK’s Limited Nuclear Test Ban Treaty, Great Lakes preservation, the Santa Barbara oil spill, and the first Earth Day.

With the United States grappling with climate change and resource exhaustion, Douglas Brinkley’s meticulously researched and deftly written Silent Spring Revolution reminds us that a new generation of twenty-first-century environmentalists can save the planet from ruin.

Doug Brinkley has done it again! Silent Spring Revolution showcases his mastery of the art of storytelling, deep knowledge of presidential history and passion for the natural world. Through exhaustive research and beautiful writing, Brinkley creates vibrant portraits of the grassroots activists—Rachel Carson, Cesar Chavez and William O’Douglas— whose work influenced the levers of power inside the White Houses of John Kennedy, Lyndon and Lady Bird Johnson and Richard Nixon with extraordinary results. This is not only a majestic work of history; it is an urgent call for our time.  — Doris Kearns Goodwin, Pulitzer Prize-winning historian

"Beginning with The Wilderness Warrior, his sweeping book on Theodore Roosevelt and the conservation movement, Doug Brinkley has been our foremost chronicler of how presidents shape our environmental policy. In this very important and timely book, filled with fascinating historical revelations, Brinkley describes how three presidents of the Long Sixties embraced the wave of environmental concerns unleashed by Rachel Carson's great work. The sense of common stewardship provides great lessons for today's partisan and poisonous political discourse." — Walter Isaacson

"Even as it vanishes under concrete and asphalt, wilderness keeps an emotional hold on the collective American heart. Douglas Brinkley’s rich and illuminating history of the modern environmental movement shows how tenacious dreamers battled against all odds to save some of our most treasured wild places. It is both a wonder, and a timely inspiration." — Carl Hiaasen

"Silent Spring Revolution is a luminous history of the environmental movement that emerged in the tumult of the 1960s. Brinkley's deft mosaic of powerful forces and powerful men puts the main spotlight on a woman, Rachel Carson. Soft-spoken but fearless, she galvanized an enduring cause by reminding us that the Earth is a natural mansion...our living home...and we abuse it at our peril."  — William Souder, author of On a Farther Shore: The Life and Legacy of Rachel Carson

"A work of stunning erudition by one of our most brilliant chroniclers of the American past. By meticulously detailing how courageous activists sparked an environmental revolution that fueled the legislative imaginations of three very different presidents, Douglas Brinkley also renders a vivid portrait of the endangered species of bipartisan cooperation in the effort to save our planet. In this magisterial account, Brinkley proves himself a man for all seasons: he springs into action and refuses to take the summer off in the desperate drive to prevent our fall into an even more destructive winter of environmental discontent." — Michael Eric Dyson, author of Entertaining Race: Performing Blackness in America

"If Douglas Brinkley writes it, I will read it. With Silent Spring Revolution, he hits another homerun: an irresistible tale of courage in the face of stubborn, dangerous ignorance and staggering arrogance, peppered with some of the most unforgettable names in history. I was swept up from page one." — Candice Millard

"In his Silent Spring Revolution, Douglas Brinkley provides an urgently-needed history of the American environmental movement, and the prophetic and courageous men and women who led it. Their gripping story is both a warning and a promise of what might still be possible as the struggle for environmental sustainability reaches a crisis point. Every American should read it, and ponder why it is that the bipartisan gains of the recent past seem so tragically out of reach today." — Jane Mayer, Chief Washington Correspondent, The New Yorker Magazine, author of Dark Money: The Hidden History of the Billionaires Behind the Rise of the Radical Right

“In Silent Spring Revolution, Douglas Brinkley animates a vibrant history of a passionate, persevering, and spirited community of people who shared a relentless eye toward justice for all. . . . Brinkley shows us through his incomparable rigor as a historian why this era . . . has brought us to a deeper understanding of why social justice and climate justice are intrinsically tied to planetary health and survival. [This] is a courageous book about courageous people that will inspire readers to find their own brave acts on behalf of the Earth. . . . I was mesmerized." — Terry Tempest Williams, author of Refuge and Writer-in-Residence at Harvard Divinity School