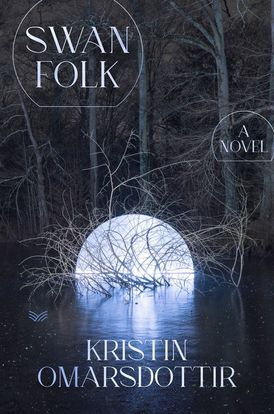 Like a modern Midsummer Night’s Dream, an ethereal and haunting novel about a young spy who enchanted by a species of half-swan, half-human creatures—an obsession that ultimately leads her to question her own existence—and sanity.

In the not-too-distant future, a young spy named Elísabet Eva finds herself mentally unraveling following an assignment in Paris. Everything in Elísabet’s life in the city—her friends, social engagements, and late nights—revolved around her work as a spy with the Special Unit. To regain her mental balance, Elísabet finds herself taking long solitary walks near the lake.

One day, she sees two strange beasts emerging from the water—a pair of seemingly mythical creatures, human woman above the waist, swan below. Curious, she follows them through tangles of thickets to a clearing . . . and into a strange new reality.

Elísabet’s walks become regular visits to these swan women. As she earns their trust, the creatures reveal the enigma of their secret existence and their desire to reproduce. Pulled further and further into the swanfolk’s monomaniacal (and often violent) quest, Elísabet finds her own mind growing increasingly untrustworthy. Ultimately, she is forced to reckon with both the consequences of her involvement with these unusual beings and her own past—and face a truth she’s carefully tried to evade.

Kristín Omarsdottir is the author of thirteen novels and eight poetry collections, and her work has been translated throughout Europe. She is a four-time nominee for the Nordic Council Literature Prize. In 2005, she won Playwright of the Year at the Icelandic Performing Arts Awards, and in 2008, she was awarded the Icelandic Women's Literary Prize. As a multidisciplinary artist who weaves elegantly through poetry, prose, visual art and theater, Omarsdottir is a cultural touchstone of Icelandic art.

Other Works by Kristin Omarsdottir