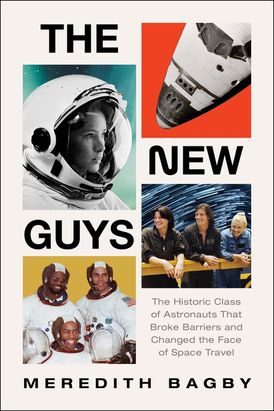 The never-before-told story of the barrier-breaking NASA class of 1978, which for the first time consisted of a diverse crew of women, people of color, LGBTQ+ people, and more, and their triumphs and tragedies working on the newly launched space shuttle program, with the exclusive cooperation of five astronauts.

This account of “The F*cking New Guys,” as their military predecessors nicknamed them, is an intimate, humorous, emotional look at these extraordinary explorers who broke barriers and blasted through glass ceilings. Egos clashed, ambitions flared, and romances bloomed as the New Guys competed with one another and navigated the cutthroat internal politics at NASA for a chance to rocket to the stars.

Marking a departure from the iconic military test plots who had dominated the space program since its inception, the New Guys arrived at the dawn of a new era of space flight, as teardrop-shaped space capsules from Mercury, Gemini, and Apollo gave way to the space shuttle, a revolutionary space plane capable of launching like a rocket, hauling crews and cargo like a truck, and landing back on Earth like an airliner. They mastered this new machine from its dangerous first test flights to its greatest achievements: launching hundreds of satellites, building the International Space Station, and deploying the Hubble Space Telescope.

The New Guys depicts these charismatic young astronauts and the exuberant social and scientific progress of the space shuttle program against the efforts of NASA officials who struggled to meet America’s military demands and commercial aspirations. When NASA was pressured to fly more often and at greater risk, lives were lost in the program’s two biggest disasters: Challenger (1986) and Columbia (2003).

Caught in the crosshairs of this battle are the shuttle astronauts who gave their lives in those disasters, and who gave their lives’ work pursuing a more equitable future in space for all humankind. Through it all they became friends, rivals, lovers, and ultimately, family.

The New Guys is The Right Stuff for a new generation.

"The New Guys is a riveting page-turner that chronicles the first American astronauts to fly the space shuttle, including the first American women and people of color who broke barriers to journey to the stars. Meredith Bagby’s thoroughly researched and finely crafted account captures the highs and lows of life as an astronaut—the grueling training, wild partying, cut-throat competition, and tragic losses of the Challenger and Columbia crews—all with spine-tingling thrills and genuine pathos." — Kyra Sedgwick, actor, director, and producer

Meredith Bagby is a nonfiction writer as well as film and TV producer. Her previous books include: We’ve Got Issues, Rational Exuberance, and an ongoing series, The Annual Report of the USA. She produces with actress Kyra Sedgwick under the shingle, Big Swing Productions. Previously she was a senior film development executive at DreamWorks SKG. Bagby was a political reporter and producer for CNN and a teaching fellow at Harvard’s Institute of Politics. Her education includes Columbia Law School and Harvard College.

Other Works by Meredith Bagby