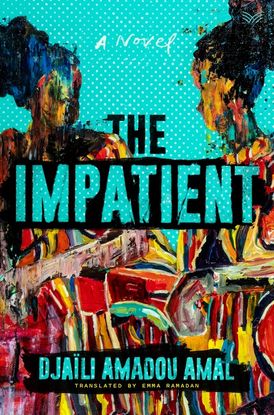 A powerful, heartrending, and insightful novel of a trio of women in Cameroon who dare to rebel against oppressive, long-held cultural traditions—including polygamy and domestic abuse—that define and limit their lives.

In North Cameroon, well-to-do young Ramla is torn from her true love and wed to a manipulative older man. Safira, her co-wife, juggles envy and empathy for this new bride with disappointment in the husband she desperately loves. Like her older sister, Ramla, Hindou is married off to a man she does not know or want, a distant cousin whose instability and violence terrifies her.

From an early age, these women were raised to submit to men, or risk shame and repudiation of themselves and their families. They are advised to have munyal—patience. They are told that their fates are the will of the All-Powerful, and that it is unthinkable—or rather, impossible—to defy tradition. They are reminded of the Fulani proverb which holds, “At the end of patience, there is the sky.”

Yet Ramla, Safira, and Hindou are tired of waiting for a happiness that may never come. Their lives are driven by impatience and clouded by the suffering rooted in forced marriage and physical abuse, but it is this oppressive culture that binds them together. In a society that demands female obedience, how will these three impatient women free themselves?

Djaïli Amadou Amal makes her literary debut in English with this remarkable novel that breaks taboos as it denounces the cultural mores of Africa's Sahel region. Inspired by the author’s own experiences and written with grace, strength, and veracity, The Impatient is a moving testimony to a shared pain and a call for change—an unflinching depiction of the psychic damage traditions can have on the women who must abide by them and a denunciation of violence against all women and the normalization of domestic abuse—not only in Cameroon but around the globe.

Translated from the French by Emma Ramadan

“The Impatient's]real complexity lies in its finely textured depictions of relationships between women—mother and daughter, co-wives, sisters—full of jealousy, compassion, and emotional energy.” — Kirkus Reviews

“A stark and unflinching view of an oppressive culture.” — Publishers Weekly

"A moving novel recounting the fate of three women from northern Cameroon [who] are assigned only one role: wife subject to the designated husband as soon as they enter puberty. Amal knows, however, that there is hope, however small. And this hope has a name: education."

"Djaili Amadou Amal is a storyteller who, while letting the voice of her characters arise, makes hers heard just as much, in a subtle whisper."
— Le Point

Djaïli Amadou Amal was born in 1975 in Diamaré in the far north region of Cameroon and grew up in the capital city of Maroua. A Fulani author and activist fighting for women’s rights, she founded and runs Femmes du Sahel, an organization dedicated to promoting the education and development of women in her region. She is the author of three previous books written in French, and the French edition of The Impatients was shortlisted for the 2020 Prix Goncourt and won the Prix Goncourt des Lycéens. Amal lives in France.

Other Works by Djaili Amadou Amal