Recipes for Mexican Pan Dulce, Tamales, and My Favorite Desserts 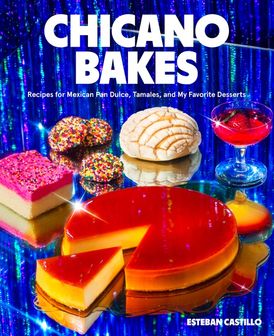 Recipes for Mexican Pan Dulce, Tamales, and My Favorite Desserts

In this companion cookbook to Chicano Eats, the blogger, and winner of the Saveur Best New Voice People’s Choice Award shows off the sweet and dreamy side of Chicano cuisine in 80 recipes for irresistible desserts, cakes, tamales, pan dulce and drinks.

With Chicano Eats: Recipes from My Mexican American Kitchen, Esteban Castillo offered his readers a look into his life, family, and culture. For Esteban, sharing stories and recipes from his childhood was a cathartic experience, and seeing so many people make and enjoy the foods that meant so much to him growing up was a dream come true.

Now, this rising food star mines his culinary roots once more. Chicano Bakes features many of the mouthwatering delights Esteban enjoyed throughout his childhood, from Pan Dulce Mexicano (Mexican Sweet Bread), Postres (Desserts), and Pasteles (Cakes) to Antojitos (Bites) and Bebidas (Drinks). Here are easy-to-make recipes sure to become fan favorites, including:

Esteban encourages everyone—no matter their level of experience in the kitchen—to get baking, especially those in his community who may be intimidated or discouraged by other cookbooks that overlook their cultural tastes and traditions. Illustrated with more than 100 bright and inviting photographs that capture the flavor of the Chicano Eats brand, Chicano Bakes is an homage to a culture that has existed in the U.S. for generations—and whose influence continues to grow. 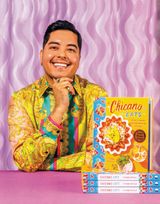 Esteban Castillo is a PR/Digital Marketing professional and the creator of Chicano Eats, a blog that showcases fun and exciting dishes that take influences and ingredients of traditional Mexican food combined with concepts and flavors from his life in California. He is the Reader’s Choice winner of the 2017 Saveur Blog Awards for Best New Voice, and Chicano Eats has been featured in Food52, NPR’s the Salt, Instagram, Remezcla, and We Are Mitú, among others.

Other Works by Esteban Castillo