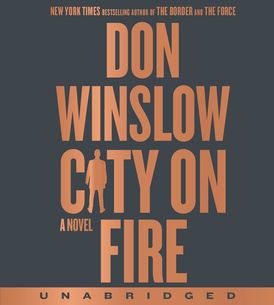 From the #1 internationally bestselling author of the Cartel Trilogy (The Power of the Dog, The Cartel, and The Border), The Force, and Broken comes the first novel in an epic new trilogy.

"Epic, ambitious, majestic, City on Fire is The Godfather for our generation.” – Adrian McKinty, New York Times bestselling author of The Chain

Until a beautiful woman comes between the Irish and the Italians, launching a war that will see them kill each other, destroy an alliance, and set a city on fire.

Danny Ryan yearns for a more “legit” life and a place in the sun. But as the bloody conflict stacks body on body and brother turns against brother, Danny has to rise above himself. To save the friends he loves like family and the family he has sworn to protect, he becomes a leader, a ruthless strategist, and a master of a treacherous game in which the winners live and the losers die.

From the gritty streets of Providence to the glittering screens of Hollywood to the golden casinos of Las Vegas, two rival crime families ignite a war that will leave only one standing. The winner will forge a dynasty.

Exploring the classic themes of loyalty, betrayal, and honor, City on Fire is a contemporary masterpiece in the tradition of The Godfather, Casino, and Goodfellas—a thrilling saga from Don Winslow, “America’s greatest living crime writer” (Jon Land, Providence Journal).

“A master of thrills shows his range, and his bite . . . [Winslow is] a writer from whom others can learn the ropes.” — Janet Maslin, New York TImes on Broken

“Winslow, whose work includes a dozen of the finest crime novels written in the last 20 years, displays all of his strengths, including propulsive narration, compelling characters and a tight, staccato writing style, in Broken, a collection of six remarkable novellas.”
— Bruce De Silva, Associated Press

"With the passing of Elmore Leonard a few years back, it’s now safe to proclaim Winslow America’s greatest living crime writer. His consistency is matched only by his creativity, his talent exceeded by his ability to surpass himself time and time again." — Jon Land, Providence Journal on Broken

“This is an outstanding sextet in which— praise be! — ‘love and loyalty trump the law.’ It is fast, furious, and very funny.”
— The Times [London] on Broken

“Exhibiting a remarkable range, [Winslow is] just as good at sprints as long distances, is as adept at mimicking screwball capers as mobster movies, and can charm as well as chill. . . . A dazzling display of versatility, this set of novellas shows Winslow to be an author who has hit his prime.”
— The Sunday Times [UK] on Broken

Don Winslow is the author of nineteen acclaimed, award-winning, international bestsellers – including the No. 1 international bestseller The Cartel, winner of the Ian Fleming Steel Dagger Award, The Power of the Dog, Savages, and The Winter of Frankie Machine – several of which have been made into movies or are in development. A former investigator, anti-terrorist trainer, and trial consultant, Winslow lives in Southern California.