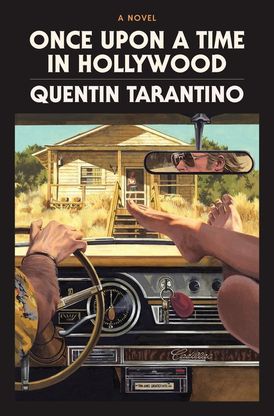 Featuring never-before-seen photos from the set and posters and other memorabilia from Rick Dalton’s career, an original, exclusive script for a Bounty Law episode by Quentin Tarantino titled “Incident at Inez” and a Mad Magazine parody of Bounty Law titled “Lousy Law: Loser’s Last Ride”

The sunlit studio back lots and the dark watering holes of Hollywood are the setting for this audacious, hilarious, disturbing novel about life in the movie colony, circa 1969.

Once Upon a Time in Hollywood tells the story of washed-up actor Rick Dalton. Once Rick had his own television series, a famous western called Bounty Law. But “it ain’t been that time in a long time” and now Rick’s only regular parts are as the heavy, ready to be bested by whichever young “swingin’ dick” the networks want to make a new star out of come pilot season. When a talent agent approaches Rick about starring in Italian Westerns (“Eye-talian Westerns”?), it only ignites a new crisis of confidence for the perpetually insecure actor.

And then there’s Rick’s stunt double, Cliff Booth, a war hero who killed more Japanese soldiers during the Second World War than any other American, and who never thought he’d make it back home. If Rick’s career has stalled, Cliff’s has flamed out. Already living under a cloud of suspicion after the strange death of his wife at sea, Cliff makes the mistake of picking the wrong fight on set, and is soon reduced to the status of Rick’s full-time gofer.

Right next door to Rick’s still glamourous Benedict Canyon home (“the house that Bounty Law built”) some Hollywood dreams are coming true, and these dreams belong to Sharon Tate. Not only is she Mrs. Roman Polanski—married to the only true rock star director—but Sharon is fast becoming a star in her own right, living life on the upswing in a tough town.

Only a few miles away, in the desert around Chatsworth, lives a different kind of dreamer. Charles Manson is an ex-con who has spellbound a group of hippie misfits living with him in squalor on an old “movie ranch.” Little do his young followers know to what degree Charlie himself is an industry striver, more desperate for Columbia Records and Tapes’s attentions than for the revolution he preaches.

These indelible characters—and many more: an acting child prodigy beaming with hope; a booze-drenched former A-lister who’s lost it all—occupy a vanished world from not so long ago that is brought to brilliant life in these pages. Here is 1969, the music, the cars, the movies and TV shows. And here is Hollywood, both the fairy tale and the real thing, as given to us by a master storyteller who knows it like the back of his hand.