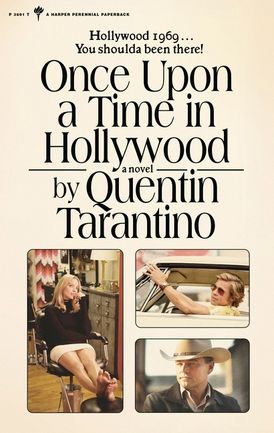 Quentin Tarantino’s long-awaited first work of fiction — at once hilarious, delicious, and brutal — is the always surprising, sometimes shocking new novel based on his Academy Award- winning film.

RICK DALTON – Once he had his own TV series, but now Rick’s a washed-up villain-of-the week drowning his sorrows in whiskey sours. Will a phone call from Rome save his fate or seal it?

CLIFF BOOTH – Rick’s stunt double, and the most infamous man on any movie set because he’s the only one there who might have gotten away with murder. . . .

SHARON TATE – She left Texas to chase a movie-star dream, and found it. Sharon’s salad days are now spent on Cielo Drive, high in the Hollywood Hills.

CHARLES MANSON – The ex-con’s got a bunch of zonked-out hippies thinking he’s their spiritual leader, but he’d trade it all to be a rock ‘n’ roll star.

HOLLYWOOD 1969 – YOU SHOULDA BEEN THERE

“Quentin Tarantino’s first novel is, to borrow a phrase from his oeuvre, a tasty beverage…He’s here to tell a story, in take-it-or-leave-it Elmore Leonard fashion, and to make room along the way to talk about some of the things he cares about — old movies, male camaraderie, revenge and redemption, music and style…In Once Upon a Time in Hollywood, Tarantino makes telling a page-turning story look easy, which is the hardest trick of all.”  - Dwight Garner, The New York Times

“Classic, sparks-flying Tarantino…Tarantino’s explosive dialogue, with its blend of streetwise and formal cadences, is almost as effective written down as read aloud…Far from being the throwaway artifact it sometimes pretends to be, Tarantino’s first novel may even, as he’s hinted, herald the start of a new direction for this relentlessly inventive director.”  - The Washington Post

“Tarantino, celebrated for his screenplays, truly is a literary force, stepping forward as a novelist adept at using an omniscient point of view to powerful effect in a novel driven by its characters’ inner lives and smart, witty, and salty dialogue of propulsion and nuance, hilarity and heartbreak….It will also offer a stereoscopic experience for most readers as they envision the characters as played by the movie’s cast…a doubling that will inspire fanatic comparisons between film and page. But this is a work of literary art in its own right, a novel that, if the movie didn’t exist, would captivate readers with its own knowing vision and zestful power.”  - Donna Seaman, Booklist

With his vibrant imagination and dedication to richly layered storytelling Quentin Tarantino is one of the most celebrated filmmakers of his generation. He made his directorial debut in 1992 with RESERVOIR DOGS, and then co-wrote, directed and starred in one of his most beloved films, PULP FICTION, which won his first Oscar® for Best Screenplay. Followed by the highly acclaimed films JACKIE BROWN, KILL BILL VOL. 1 and VOL. 2, and DEATH PROOF, Tarantino then released his World War II epic, INGLOURIOUS BASTERDS, DJANGO UNCHAINED (which won his second Oscar® for Best Screenplay), and the HATEFUL EIGHT. Tarantino’s most recent film, ONCE UPON A TIME...IN HOLLYWOOD, was nominated for five Golden Globes, ten BAFTAS, and ten Academy Award nominations.