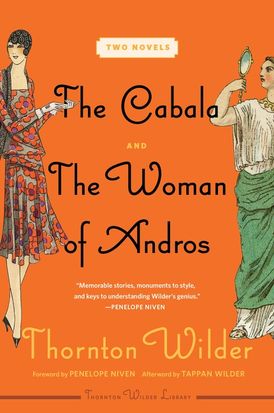 “For much of the twentieth century, these remarkable early novels were hidden in the great shadow of The Bridge of San Luis Rey. Now we can examine them in the spotlight for the gifts that they are—memorable monuments to style and keys to understanding Wilder’s genius.” – Penelope Niven, Thornton Wilder Biographer

Featuring a foreword by Penelope Niven and a revealing afterword by the author's nephew, Tappan Wilder, this gorgeous reissue reacquaints readers with Thornton Wilder’s first novel, The Cabala, along with The Woman of Andros, one of the inspirations for his Pulitzer Prize-winning play Our Town.

The Cabala tells the story of a young American student who spends a year in the exotic world of post-World War I Rome. While there, he experiences firsthand the waning days of a secret community (a "cabala") of decaying royalty, a great cardinal of the Roman Church, and an assortment of memorable American ex-pats. A semiautobiographical novel of unforgettable characters and human passions, The Cabala launched Wilder's career as a celebrated storyteller and dramatist.

The Woman of Andros, set on the obscure Greek island of Brynos before the birth of Christ, explores universal questions of what is precious about life and how we live, love, and die. Eight years later, Wilder would pose these same questions on the stage in a play titled Our Town, also set in an obscure location, this time a village in New Hampshire. The Woman of Andros is celebrated for some of the most beautiful writing in American literature.

“The debut of a new American stylist...[a] significant literary event. . . . A work of art in both form and design.” — New York Times on The Cabala

“One of the most delectable myths ever issued from the hills of Rome.” — Time Magazine on The Cabala

"Thornton Wilder's 1926 debut novel probes the inscrutable mystery of the ancient, fabulous wealth that confers a kind of immortality on its custodians, allowing their natures to form without concession or compromise to life beyond their privileged enclave. . . . [It] established Wilder as one of the most accomplished stylists of his generation." — The Guardian on The Cabala

“The book had form, and hardly anyone doubted from the first that Wilder would be a member of the new galaxy.” — Malcolm Cowley on The Cabala

“First and last a work of art.” — Carl Van Doren on The Woman of Andros