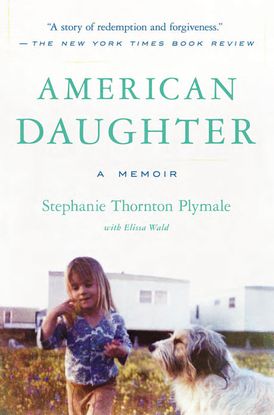 The sharp and surprising true story of a woman who finally sets out to understand her past, and the mother she had one day hoped to forget. Full of unexpected twists and unbelievable revelations, American Daughter is an immersive memoir that will have you on the edge of your seat to the very last page.

For years, Stephanie Plymale, successful CEO and interior designer, kept her past a fiercely guarded secret. Only her husband knew that her childhood was fraught with every imaginable hardship: neglect, hunger, poverty, homelessness, truancy, foster homes, a harrowing lack of medical care, and worse. Stephanie, in turn, knew very little about the past of her mother, who was in and out of jails and psych wards for most of Stephanie's formative years. All this changed when a series of shocking revelations forced Stephanie to revisit her tortured past and revise the meaning of every aspect of her compromised childhood.

American Daughter is the extraordinary true story of a young girl growing up on the wrong side of the American Dream. Stephanie has slept in blankets on the floor of crowded apartments, lived in the back seat of a car with her siblings, and spent decades looking over her shoulder at a mother who might just as easily hug or harm her. American Daughter is at once a moving account of a troubled mother-daughter relationship and a meditation on resilience, transcendence, and ultimately, redemption.

"[Plymale's] lineage, which she traces back to the Revolutionary War, represents a sort of inverse American dream...Her people become less respectable through the generations until the line arrives at Plymale herself, whose own life marks the point where the needle begins to move in a positive direction once again. It's a story of redemption and forgiveness." — Mary Beth Keane, New York Times Book Review

"Impressive...Moving...Readers will find themselves recalibrating their judgments about villains and victims and questioning how one family could fall so far down through the cracks... American Daughter will resonate" — BookPage (starred review)

"a gut-wrenching and absorbing portrait of one family’s legacy of mental illness and childhood trauma." — Booklist

“In this sharp, heartrending work, Plymale reconciles with the truth of her mother’s life, finding forgiveness, hope, and even pride. Her testimony, while painful to read, is vital.” — Library Journal

“[A] poignant and often distressing memoir....The writing is shatteringly candid but never overwrought, the story a stark reminder that 'the most difficult people are often suffering in ways we can't fathom.'" — Shelf Awareness

“By sharing your story, I’m sure you know how much you’re helping others.” — Sheinelle Jones, TODAY Show

Compelling and well-told, the story is full of surprises, including the revelation of a long-held family secret and the uncovering of lineage that traces back to famous American figures.  — Globe and Mail (Toronto)

"American Daughter–in the tradition of classics like The Glass Castle, LA Diaries and White Oleander–explores in unsparing details the complex interplay between intimate family ties, generational abuse, cataclysmic losses, and the extraordinary and limitless power of compassion and self-discovery." — Gina Frangello, Author of ‘Every Kind of Wanting’ and ‘A Life in Men’, Editor of The Coachella Review

Stephanie Thornton Plymale is the CEO of Heritage School of Interior Design and the founder of the Heritage Home Foundation, a nonprofit serving families transitioning from homelessness. She lives with her husband and three children in Portland, Oregon.

Other Works by Elissa Wald